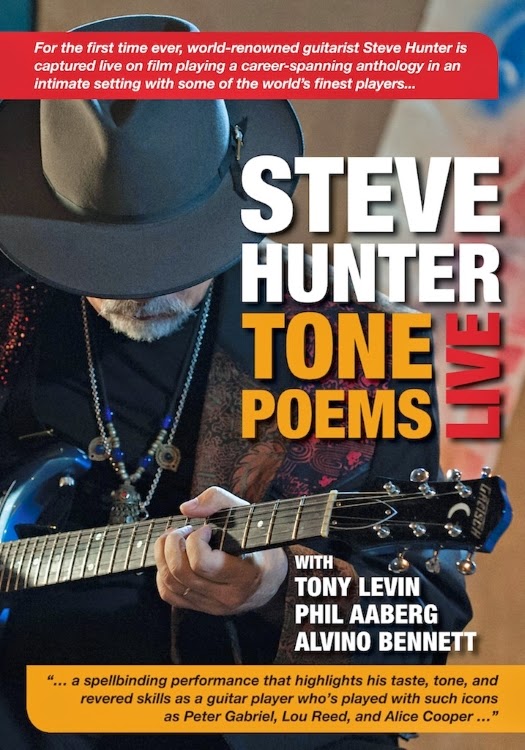 “Steve is a wonderful musician with great chops and a big heart.” - Peter Gabriel

Los Angeles, CA - For the first time ever, Blues Rock Guitarist Steve Hunter, renowned for his work with Peter Gabriel, Lou Reed and Alice Cooper, is captured on film playing a career-spanning anthology in an intimate setting with some of the worlds finest players.

They rehearsed for two days and filmed on the third day as though it were in front of an audience. Fourteen tunes, each played twice, with no overdubs added later. The material was chosen from most of Steve’s solo albums plus a few covers, including ‘Solsbury Hill’ ‘What’s Going On’ and Stevie Ray Vaughan’s ‘Riviera Paradise’.

“The soulful notes that Steve Hunter plays have the perfect balance of fat warm tone, taste and personality” - Steve Vai

This is the first time Steve Hunter has ever been filmed doing his own material plus material of his own choice. Steve is now legally blind and although not out of the question, touring has become more of a challenge. The recording session was produced and recorded by Brian Brinkerhoff and Paul Lani.

Tony Levin: “Steve is one of those wonderful musicians who speaks from the heart”

Phil Aaberg: “There’s something about the subtlety, the texture and the tone quality that he gets with an individual note, to me that’s a great guitar player”

Jason Becker: “I can't put into words how much your soul comes out of your fingers. Everyone should see and hear this DVD”!

Watch some of the DVD: https://www.youtube.com/watch?v=68-xsbfVypI