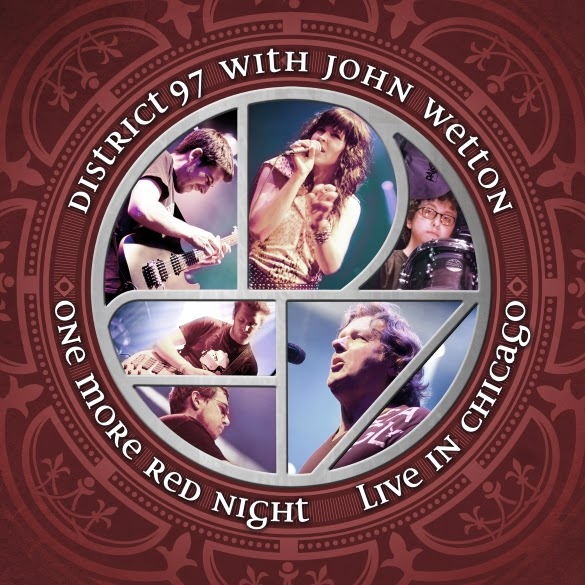 'One More Red Night: Live In Chicago' includes three songs from the iconic landmark album 'Red’; which inspired many musicians including Kurt Cobain. This CD also captures several other well-known songs from the three King Crimson studio albums John Wetton played and sang on, plus their earlier hit “21st Century Schizoid Man”. This is the first release of this recording and features many tracks which are now rarely heard live.

“I've said it before, and I maintain that D97 is the best young progressive band around right now. Gifted players, great material, and a brilliant, charismatic singer in Leslie Hunt. Their shows are an exciting pleasure to attend, and I am proud to work, and be associated with them.” - John Wetton, Annapolis, October 1,2014.

District 97's drummer and 'One More Red Night' producer, Jonathan Schang, says “The first Crimson song I ever played live with John was 'Lament'. To hear 'that voice' coming from right in front of me, seemingly made only stronger by the passage of time, was an experience I shall never forget. Getting to know John more closely, both as a musician and a human being, is an honor and a privilege. I'm thrilled that our joint interpretations of his iconic work with King Crimson are now available for all to enjoy.”

John Wetton’s last solo project was a 2 CD re-issue of Monkey Business and Jack-knife, the former of which includes many of his early 1970s versions of tracks that went on to become some of King Crimson’s most iconic songs: