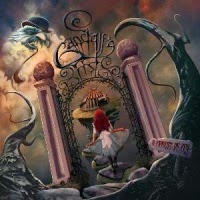 I was very pleased when this album, A Forest of Fey by Gandalf’s Fist, dropped onto my desk for review as I had reviewed the last album, A Day In The Life Of A Universal Wanderer, and was very impressed by the music. Initially formed in 2005, apparently when a mutual friend of the two founding members, invented a silly name to impress someone, and thus Gandalf’s Fist was formed by multi-instrumentalist Dean Marsh and lyricist/vocalist Luke Severn. The band has been influenced by classic bands such as Pink Floyd, The Who and Iron Maiden, then Porcupine Tree. The band has produced 4 albums prior to A Forest Of Fey, starting with The Master and the Monkey (2010), Road To Darkness (2011), From A Point of Existence (2012) and as previously mentioned, A Day In The Life Of A Universal Wanderer (2013).

For this latest album, the band has been expanded with the addition of 2 more members, so alongside Dean (vocals, guitar, mandolin, keyboards and additional bass) and Luke (vocals), we now have Chris Ewen (bass) and Stefan Hepe (drums). There has also been a glittering array of guests on the album, with John Mitchell from It Bites/Arena (vocals), Troy Donockley from Nightwish/Bad Shepherds (bouzouki and low whistles), Dave Oberle from Gryphon (bodhran), Clive Nolan from Pendragon (keyboards) and Matt Stevens from The Fierce and the Dead (ambient guitar). Two other vocalists also joined in the fun, Melissa Hollick (female lead) and Jennifer Pedersen (additional backing).

A Forest Of Fey is a 12 track album with a total playing time of around 51 minutes and follows the psychedelic folk tinged journey of a young girl trapped in a malevolent woodland, so, you might have guessed what we have here is a concept album. The shortest track included on the album is little more than a connecting segment and is track 4, “The Figure Speaks” at only 44 seconds, and the longest track is the title track, “A Forest of Fey (including Wisdom of the Reptile and The Lament for a Silent Verse)” at over 8 minutes. (8:33)
As already mentioned, A Forest Of Fey is a concept album and the opening track, “Childhood Ghosts” (2:22) is an amazingly atmospheric offering as it sets the scene of the young girl wandering too far away from her mother and drifting off into the woodland. A voice drifts in and out of the background followed by a squawking crow, a creaking gate and steps on a gravel path, before the haunting vocals of Luke lead the track on into “Gardens Of The Lost” (6:03). There is some stunning work on whistles by Troy Donockley and then the crystal clear vocals of Melissa Hollick continue the story. The initial folk prog sound merges into prog rock and there are several shifts and tempo changes. Troy then reappears adding an almost Tullesque sound to the proceedings. These opening 2 tracks certainly pull the listener into the story and when the tale moves into the title track, “A Forest of Fey” (8:33) you become aware that you are listening to a stunning piece of work. The vocals are mainly the responsibility of Luke and the track floats in and out of the light and dark, all the while drawing the listener further and further in.

The shortest track, “The Figure Speaks” (0:44) is a spoken monologue, linking what has gone before with what is about to happen. “The World We Created” (5:42) gently takes the storyline onwards and is firmly steeped in prog style with some superb hooks as the track ebbs and flows. Moving into track 6 “The Circus In The Clearing” (4:44), the keyboards get the chance to shine, painting a perfect aural soundscape to depict the title. The vocals are again by Luke, before the track moves into an almost dream-like section with eventually some intense work by all the band members.

There then follows a short atmospheric piece, “Blood For A Royal Pardon” (1:37) with more dream-like vocals, which then flows into “Drifter On The Edge Of Time” (6:37). Some gentle piano starts this track with some subtle guitar work in the background, provided by Matt Stevens, before the sound builds slowly to herald the entrance of Luke and a continuation of the story which switches the vocals to Melissa and then both voices swap the lead before some excellent harmonizing. A classic keyboard passage, courtesy of Clive Nolan, builds up just prior to 6 minutes and the track meanders to a finale.

“Forest Rose” (4:36) harks again to the Jethro Tull sound with a Celtic slant and slightly different style of vocal, but the excellent high standard of both music and lyrics continue onward effortlessly. Track 10, “Return From The Tournament” (2:04) has the added contribution of Troy (Cumbrian bouzouki) and the vocals and bodhran playing of Dave Oberle. This is a very simple but effective rock ballad and leads the storyline into “Stories Old and Stories Told” (6:05) which is another superb piece of music involving John Mitchell on vocals and Matt Stevens on ambient guitar. This is a slow burner of a track, supremely melodic, which takes flight a couple of times. There is some great harmonizing between male and female voices towards the ending.

The final track “A Poison Tree” (2:37) is heralded by woodland sounds and a ringing bell and a breathy but powerful vocal which brings the story to a conclusion. This is another track which builds in intensity before returning to the plaintive sound of the mother crying out for her child.

A Forest Of Fey is best listened to in its entirety, as all concept albums should be. From the aural soundscape introduction to the return of the same as the story concludes, the listener is drawn into this majestic piece of work. I was very impressed with the previous album, A Day In The Life Of A Universal Wanderer, but Gandalf’s Fist has raised the bar by several notches. This album certainly sports both “One To Buy” and “The Experience Will Last Forever” stickers on the cover and my simple advice would be to go and get a copy as soon as you possibly can, as you will not be disappointed.

Key Tracks: Gardens Of The Lost, A Forest Of Fey, Stories Old and Stories Told

Tracks:Childhood Ghosts
A Forest Of Fey
The Figure Speaks
The World We Created
The Circus In The Clearing
Blood For A Royal Pardon
Drifter On The Edge Of Time
Forest Rose
Return From The Tournament
Stories Old And Stories Told
A Poison Tree
Jim “The Ancient One” Lawson-Sr. Reviewer Prog Rock Music Talk