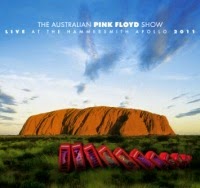 This was an interesting album to receive for review, Chicago Theatre Oct 2nd, by The Australian Pink Floyd Show, as, although I have not seen this bunch live, I have seen another world renowned Pink Floyd tribute band and I was very impressed. The band had its beginnings in Adelaide in 1988 when a local guitarist, who was obsessed by Pink Floyd, was looking to augment his band and advertised for a vocalist and a keyboard player with the proviso that the band played “only Pink Floyd.” The resulting 5 piece band honed their sound, but despite positive crowd reaction, they drifted apart until a refocusing and redoubling of their efforts moved them forward in 1992.

Their big break came when Think Floyd, as they were then, were considered as ideal for a Pink Floyd Convention at Wembley in 1993, and by the time this rolled around, the band had become The Australian Pink Floyd Show. They were then asked to perform at an event marking David Gilmour’s 50th birthday and were joined onstage by David and Rick Wright.

Fast forward to 2014 and The Australian Pink Floyd Show has evolved into one of the best tribute bands in the world. The show, as it is very difficult to keep referring to them as a band, comprises of a large number of members, at the last count, 11 of them. They are Steve Mac (guitar, vocals), Jason Sawford (keyboards), Colin Wilson (bass, vocals), Paul Bonney (drums), David Domminney Fowler (guitar, vocals), Alex McNamara (vocals), Lorelei McBroom (vocals), Laura Smiles (vocals), Emily Lynn (vocals) and Mike Kidson (sax).

The live album release, Chicago Theatre Oct 2nd, is a 9 track album with a running time of around 70 minutes. The longest track on offer is the opening track on the album, “Shine On You Crazy Diamond” at 14:08 minutes, which is a curtailed version of the original, which is over 25 minutes long in its full version, and the shortest track is “What Do You Want From Me?” from the latest Pink Floyd release, The Division Bell, at 4:29 minutes.

The opening track, “Shine On You Crazy Diamond” (14:08), is performed immaculately, which isn’t surprising considering how long the band have been playing the Pink Floyd catalogue. As with all the tracks on offer here, you can easily imagine that you are listening to Pink Floyd and unfortunately, that is where my problem arises.
As I mentioned in the introduction, I have seen another Pink Floyd tribute band, who also tour the world, and while the live event was an amazing evening, I didn’t feel like purchasing a live CD of a previous show which was available at the merchandise stall. I would imagine that an evening watching The Australian Pink Floyd Show would be an unforgettable experience with the light show, the atmosphere and the amazing collection of musicians all gelling together, making those people unlucky enough not to have seen Pink Floyd live (and I include myself in that number sadly), live through an evening as close to the original evenings as possible.

The Australian Pink Floyd Show cover material from several albums that include Meddle (1971), Dark Side Of The Moon (1973), Wish You Were Here (1975), The Wall (1979) and The Division Bell (1994) and if you have the chance to see the band live and want an audio reminder, then this release might be what you are looking for, but I cannot see where the wider market for this release lies.

The Australian Pink Floyd Show is a large group of skillful professional musicians presenting a spectacular evening of entertainment, which anyone attending will be blown away by, but a live covers CD, such as Chicago Theatre Oct 2nd, I am not at all sure about. This therefore makes any grading very difficult, but I have decided on the grade below on the basis of the excellent skill of the musicians involved.

Key Tracks: Shine On You Crazy Diamond, Another Brick In The Wall, Wish You Were Here


Tracks:
Shine On You Crazy Diamond
Coming Back To Life
Time_Breathe (reprise)
What Do You Want From Me
Money
Another Brick In The Wall
Wish You Were Here
One Of These Days
Comfortably Numb