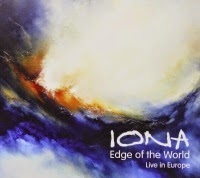 It comes as a refreshing change to review a band that I am very aware of, and that band is the progressive Celtic rock band from the UK, Iona. Beginning back in 1989, the band has not flooded the market with their releases, with only 7 studio albums across their 25+ year existence. The self-titled debut album was issued in 1990 and the latest studio release was the double CD, Another Realm, from 2011, although they have also released 4 live albums, the latest being the one under review, Edge Of The World. (2013)

Edge of the World (Live in Europe) was recorded at various venues in the UK and The Netherlands during their 2012 Another Realm tour. The double album contains 20 tracks split equally over the two discs with a total playing time of around 130 minutes, again split almost equally across the discs with about 65 minutes each disc. The longest and shortest tracks across the release are “White Horse” and “Another Realm,” both on disc 1 and 11:10 minutes and 4:17 minutes respectively.

The tracks are taken from almost all of the studio albums, although for some reason, the album released in 2006, The Circling Hour doesn’t feature at all, and there are 7 tracks from the last studio album, Another Realm, which isn’t surprising considering the name of the tour.

Edge of the World starts with loud audience appreciation before the crystal clear voice of Joanne emerges over a subdued background. The whistles appear around 1:40 minutes and the track builds with the return of Joanne and the rest of the band seamlessly upping the ante, slowly generating a stunningly atmospheric opening track, “Irish Day” (7:39). Apart from the applause prior to the band starting, there is little to suggest that this is a live album such is the clarity and quality of the music. All too quickly, the 7:30+ minutes of “Irish Day” have gone and it serves as a superb opener to an album highlighting the supreme musicianship within Iona.

“Jigs” (7:03), track 4, “does exactly what it says on the tin,” to quote a UK advert. Jigs it states and unsurprisingly, jigs abound for the length of this track. Bass runs, piano, superb whistle and uillean pipes combine to form an amazing track.

The title track, “Edge of the World” (8:04) allows Dave Bainbridge to show his majestic skill on the guitar with a simply amazing first 2:30 minutes when the guitar atmospherics are replaced by terrific drumming and superb piano. Add into that scenario the beautiful voice possessed by Joanne and the band have hit the bulls-eye again.

The closing track of disc 1, “The Ancient Wells” (8:30) starts with those amazing pipes while the drums and bass play gently in the background. The sound builds with the keyboards becoming more prominent prior to more superb percussion and Joanne’s voice appearing. This track is certainly one that carries people along in an almost anthemic way. The pipes are always there, just behind the rich tones of Joanne and edge to the forefront again around the 4 minute mark. Just after the 5 minute mark, the violin changes the sound again and the feet start to unconsciously move to the rhythm. “The Ancient Wells” is a real tour-de-force of a track to finish off disc 1.

The third track on disc 2, “And The Angels Dance” (9:02) is another superb example of progressive folk rock or Celtic rock, call it what you will. A pacey atmospheric track with great guitar, drumming, vocals and whistles as the track builds to about the 3:50 minute mark, when pipes and fiddle combine perfectly to carry the track along and drops back into an almost military style drumming with superb whistle playing over the top. The band slowly fills in the background and the majestic pipes come in to take the song out at around 8:15 minutes with the rest of the track being taken up by Joanne explaining that the following 3 tracks will be played uninterrupted.

Track 7, “An Atmosphere of Miracles Part 3” (10:25) is another stunningly atmospheric soundscape. The pipes commence the song, which gently evolves into vocals, drums and an exquisite piano motif behind the vocals. The powerful voice of Joanne carries the track along before passing it onto a violin led passage and further on into another of those sublime guitar statements by Dave. The music drops away to leave an almost a cappella section, which is stunning in its simplicity. The song continues to change with driving drums and whistles with acoustic guitar before the return of the vocal, which leads on and into a pipe/piano passage. This is a track that builds and builds and then, it has gone.

The following track, “Castlerigg/Reels” (9:51) is again a bit of a giveaway and is another in the plethora of tracks that simply refuse to let your feet stay still. The finale to disc 2, “Columcille” (4:29) is an amazing soundscape with pipes and whistle which slowly builds in intensity and then it is over. Disc 1 ended with a tour-de-force, disc 2 ended with an emotional tinged slow air and both, in very different ways, epitomize what the band, Iona, is all about.

Edge of the World easily deserves, and gets, both stickers, “One to Buy” and “The Experience will last Forever” on the cover, and my advice is to get out and buy a copy of this album, as you will certainly not regret it.

Key Tracks: Irish Day, Edge Of The World, And The Angels Dance