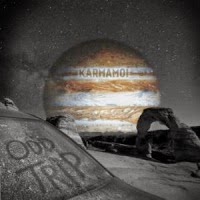 There are many Italian progressive bands around and The Ancient One can now add another to his personal list for the first time, and that band is, Karmamoi. The album for review is the second release from the band, following on from the debut, the self-titled Karmamoi (2011) and is called Odd Trip. While doing a bit of research into the band, I also found out that Odd Trip is a year old and there is already a follow-up scheduled for imminent release. Still, this review will fit under the old adage, “better late, than never” and I will look forward to the shiny new release.

Formed back in 2008, Karmamoi released a single the following year, toured Italy and started work on the debut album in 2010. Although as a general rule, I dislike trying to fit bands musical styles into a neatly labelled box, rather than under the umbrella of progressive rock, Karmamoi do play melodic prog rock, albeit with a distinct leaning to the heavy side.

The band, at the time of recording Odd Trip, was a 5 piece, comprising, Daniele Giovaanoni (drums), Serena Ciacci (vocals), Alessandro Cefali  (bass), Fabio Tempesta (guitars) and Alex Massari (guitar). Since that recording, Serena, the female vocalist, has been replaced by Joline Forshaw.

Odd Trip by Karmamoi is a 12 track album with a total playing time of around 51 minutes. There are 3 tracks which are very short and I would term them interludes, or linking tracks, and they are tracks 1, 5 and 9. They are titled “Oxygen” parts 1, 2 and 3, with running times of 1:44 minutes, 0:56 minutes and 0:58 minutes respectively. Track 4, “If I Think Of The Sea” is the longest track on offer, running on for over 6 minutes. (6:34)

The 3 “Oxygen” tracks are strange little linking pieces of atmospherics with sound effects, the odd riff and electronic bleeps. The “meat” of the album is contained within the other 9 tracks, with track 2, “If” (4:14) the first full track on Odd Trip. Starting with the sound of someone moving around, it evolves into some heavy riffing guitars. This is certainly an interesting start and then everything falls away to leave the fragile vocals provided by Serena. The background slowly builds behind the voice and there is an ethereal melody about the track this far. Around the 3 minute mark, back comes the sound of movement again and then those thundering guitar riffs. The song then makes its exit to the plaintive sound of a telephone.

Track 3, “Labyrinth” (5:42), has a slightly lower riffing intro with some electronic sound in the background, before Serena enters much earlier than in the previous track. Crystal clear vocals soar over the fairly sparse background before Serena ups the power a notch or two. The track then drops back down to let the music build as it did before, then the guitar, bass and drums get a chance to shine with some subtle gentle guitar from Fabio soaring over all. A gentler form of riffing builds the song towards a finale then the music fades again to allow Serena to carry the song onwards, backed by some very neat bass runs.

“If I Think Of The Sea” (6:34) is a much more atmospheric song carried along by the subdued music and the stunning voice of Serena. Very different from what has gone before, the guitar, which takes center stage around the 3 minute mark, has a very subdued tone. Some ineffectual noises are heard in the background prior to the vocal building heralding the ending of the track. This is a very different approach by the band which pulls the listener quickly into the track.

The strangely titled “Samvega” (5:24) again has that subdued melodic starting point, which meanders along creating a very atmospheric soundscape. Around the halfway point the band have moved the music into the heavier side prior to everything becoming stripped back again. All in all a much laid back instrumental track which leads neatly into “Yours.”

“Yours” (5:08) is another complete style change with “yowling” guitars and powerful vocals leading into a driving animal of a track, easily the most powerful track thus far. There is next to no easing back on this track and then the voice fades leaving the rhythm engine to motor for a while. Serena re-enters the fray and the track moves up another notch on its race to the finish.

Track 8, the title track, “Odd Trip” (6:10) has a neat drum/bass interaction as an opening, the vocals taking over before passing onto a short guitar passage. An almost “funky” bass line merges into a full band blowout and the song drives along before being escorted back into the opening themes. More of that ultra-melodic guitar puts in an appearance before the build-up to the finale.

Another strangely titled track, “5+” (4:06) follows the last of the “Oxygen” linking tracks, and the spoken intro is soon into a heavy riffing passage. There are some more subtle guitar riffs as the song progresses before another atmospheric spoken piece. A repeat of the riffing then escorts the track out.

“Lost Days” (4:26) moves away from the riffing guitars to enter with a keyboard passage and “breathy” vocals and provides a very melodic track, showing the other side of the band. Cue the final track, “Aria” (6:11) and some powerful drumming, superb vocals herald a real rocker of a track. There are little hints at power riffing, but these are kept well in check.

Certainly, Karmamoi, are not an Italian band of the Premiata Forneria Marconi (PFM) family, but have a style all of their own. Flowing from almost Pink Floyd based atmospherics to the more power prog of Rush, Karmamoi have produced a midpoint mixture which makes for an extremely interesting and listenable album.

Odd Trip probably requires several listens, but when it does get inside the listener (or vice versa), it is a terrific slice of heavy prog.

Key Tracks: If I Think Of The Sea, Samvega, Odd Trip


Tracks:
Oxygen 1
If
Labyrinth
If I Think Of The Sea
Oxygen 2
Samvega
Yours
Odd Trip
Oxygen 3
5+
Lost Days
Aria