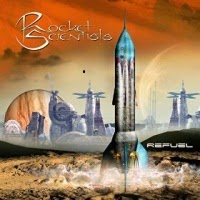 Having previously reviewed Rocket Scientists, a symphonic prog band from USA, with the release of their 2 track EP, Supernatural Highways, it is with a great deal of anticipation, that I have the new full length release, Refuel, on my desk for review.

Refuel is a 16 track album with a total playing time of around 79 minutes. The final four tracks are classed as bonus tracks, being as they are tracks that are already contained in the main body of the album, but appear without the crossfading. The longest track on offer on Refuel is track 10, “Rome’s About to Fall” at 8:15 minutes with track 8, “Reconstruct,” the shortest at 1:29 minutes.

The opening, and title, track, “Refuel” (2:13) is a short band workout that seems to just put layer after layer of sound to start and then allows an amazing passage of keyboards (Erik), followed by guitar acrobatics (Mark), all suitably “nailed down” by the bass (Don). This is a short track that simply demands you to listen to the rest of the album.

“She’s Getting Hysterical” (6:05) grabs your ears from the word go and proceeds to take you on a simply amazing aural journey. There are hooks galore, superb echo vocals, deep powerful vocals, an amazing motif that appears several times, mainly keyboard based, but toward the end, the motif appears played on a trumpet. The keyboards are simply sensational over this track.

The final four tracks, mentioned earlier as extras, with no crossfading, have very slightly different running times, but only by a few seconds.

This album was featured on my radio show, “She’s Getting Hysterical” and “Rome’s About To Fall” from the album and the long “Traveller On The Supernatural Highways” from the recent EP release and there were several comments about the amazing music being broadcast.

Refuel is a return to the sound that the Rocket Scientists are known for. On offer on this album, are the solos, from all the main musicians, the pop elements and the prerequisite key-changes that followers of Rocket Scientists will be on the lookout for. They will not be in any way disappointed with what they hear on Refuel, the huge swathes of majestic keyboards from Erik Norlander, excellent guitar work by Mark McCrite and that perfectly pitched and matched bass provided by Don Schiff are all here.

Refuel is an album that demands to be played over and over to really appreciate the majestic release that it is. Both “One to Buy” and “The Experience will last Forever” stickers adorn the cover and I can almost guarantee with 100% certainty, that upon hearing Refuel, it will be purchased and have a special little place on your CD shelves.

Key Tracks: She’s Getting Hysterical, It’s Over, Rome’s About To Fall