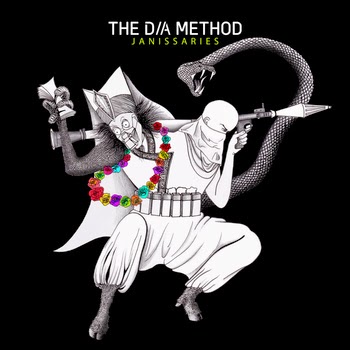 While listening to The D/A Method and their EP Janissaries (that was dropped last Christmas Eve) I thought of bands like Opeth and Metallica and a few others along the way. It is like these bands had offspring and then there was The D/A Method.

Well let me tell you it works, and very well I might add. In three tracks they make their mark and I am certain if you like progressive rock and or metal you will love this music.

This band of brother’s hails from Karachi Pakistan but they sound like they could be from New York or Boston, but that doesn’t matter because music is so universal. The only thing that separates them from where I sit is an ocean and a touch of their own culture within their music.

If the world was like a gathering at a concert there would be world peace and harmony. No lines drawn in the sand and all prejudgments disappear in this world. I have been thinking about this a lot lately and when I heard that the band was from Pakistan it all came home to me in a heartbeat. Then they just blew me away and once again all those realizations about the beauty of music hit me square between my eyes.

The lead off and title track “Janissaries” is a killer 9 plus minutes of straight ahead progressive metal. It rocks, it stops, it starts, and then it takes you on a trip to the stratosphere of musical delight. When you hear the word EP you immediately think that it’s going to be short stay in the pleasure zone. The fact that this is prog makes it a worthwhile and a lengthy enough spin to leave you satisfied but wanting for more, which is a good thing too.

“Brave” (an excellent Katatonia cover) is over 6 minutes of hard rockin’ prog metal and “Alvida Live at Satellite Recording Studios” and just shy of 5 minutes and it offers some nice passages of music influenced from their country and it again rocks and rolls its way into your heart. These days its 60 minutes plus for a regular release but this was so good that it did not disappoint at all in regards to the timeframe. I do want to hear more from this band without a doubt. The lead off track is hard to top but the succeeding tracks are solid and present the true colors of this promising band.

Give The D/A Method a good listen, I promise you won’t regret it.