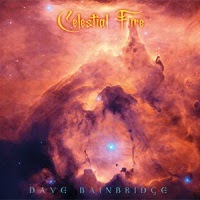 This is an interesting release for review, as I have recently reviewed the live Iona release, and Dave is a member of that particular band. This is the second solo release by Iona’s co-founder, Dave Bainbridge, following on from Veil of Gossamer (2004) and is titled Celestial Fire. The impetus for Celestial Fire comes from the excitement and exhilaration Dave received when listening to his early musical heroes, including, Yes, Gentle Giant, Mahavishnu Orchestra, Curved Air, Clannad, Deep Purple, Mike Oldfield and many more.

The sound of Celestial Fire encompasses an array of soundscapes, Celtic, progressive, spiritual and folk rock, and according to the press release, “a larger than usual dollop of what some might term progressive rock type musical adventuring.”

As Celestial Fire is a solo album, there are many excellent musicians making guest appearances across the album. Dave plays, 6 and 12 string guitar, bouzouki, mandolin, piano, organ, keyboards, autoharp, finger cymbals, Darbukka (Middle Eastern drum), Chimes, Indian leg bells, beer shaker, tambourine and, if that wasn’t enough, contributes to the backing vocals. The guests include, and I will only mention a few of the 19 musicians involved, Colin Leijenaar (drums, mellotron choir), Randy George (bass), Damien Wilson and Joanne Hogg (vocals), Troy Donockley (Uilean pipes, various whistles), David Fitzgerald (tin whistle, flute, Chinese flute, and soprano, alto, tenor, baritone saxophones) and Frank van Essen (string ensemble, solo viola, solo violin).
Celestial Fire is a 10 track album with a playing time of around 74 minutes. There are four tracks with running times in excess of 10 minutes, with the title track, “Celestial Fire” the longest at 15:22 minutes and the other tracks fall into the 6 minute or under category. The two shortest tracks are linked, track 1 and track 9, “Heavenfield” and “Heavenfield Reprise” lasting 1:10 and 0:46 minutes respectively.

The opening track, “Heavenfeld” (1:10) has a very Celtic feel to it with the Uilean pipes very prominent playing a haunting theme, which only lasts for just over a minute but is an excellent beginning to the album.

The Title track “Celestial Fire” (15:22) starts with a band tour-de-force, including some stinging guitar work, driving the track from the start. As the starting sound fades into some background atmospheric sounds, a female voice is heard away in the distance, before becoming richer and more powerful. The male and female voices join leading into a passage of superb acoustic guitar and keyboards. If it is possible for a track to merge the elements of rock while retaining a dream-like state at the same time, this track does just that. Uilean pipes continue the Celtic soundscape with a slow, almost somber passage which evolves back into the rock area again. There is more time for the excellent guitar work to be given a little spotlight. The track moves effortlessly between the out and out rock style, with amazing duets, to the more atmospheric passages throughout its 15 min length and is the type of track that demands the replay button get pressed.

“See What I See” (6:03) continues the rock/atmospheric scenario before “The First Autumn” (4:03) arrives as a haunting ballad fronted by one of the guest female vocalists.  Track 5, “For Such A Time As This” (10:30) is another of the extended tracks, with piano introduction, interspersed with soaring guitar and full band “chunks,” which instantly brings the ears to attention. Touches of the fusion and jazz/rock associated with the Mahavishnu Orchestra (circa Birds of Fire) pepper this workout and there is a superb, if unexpected, acoustic passage to calm the driving rock which then returns to carry the track out.

“Innocence Found” (5:48) returns to the very Celtic sounding soundscape but replaces the Uilean pipes with guitar and is another hauntingly atmospheric piece of magic. The 13+ minutes of “Love Remains” revisits the jazz/rock arena and even hints at Yes styled guitar passages, throws in ethereal vocalizations and majestic synth passages as it ebbs and flows, with the guitar passage around the 10 minute mark being simply stunning, prior to the full blooded outro of the track.

“In The Moment” (14:20) is a superb track, filled with atmosphere, as the track builds, edging at times toward the sound of Iona, and seems to undulate along for the opening 5 minutes before a rougher, more powerful style takes over, including some excellent keyboard work. Around the 9 minute point the track moves into a rockier context, with the guitar soaring above all, before there is a keyboard passage which just “nails it.” After looking as if the ending was going to be building up and then out, the sound drops away and the ending is very gentle.

“Heavenfield (reprise)” (0:46) is just that and flows into the last track, “On the Edge of Glory” (3:05) which features those Uilean pipes, and is a haunting track, stunning in its simplicity. The sound builds around the 1:30 minute point with harmonized vocals augmenting the melody of the pipes. This is an unbelievably poignant ending to what is a stunningly amazing album.

Take one excellent musician/composer, add the Celtic foundations of Iona, allow the artist to expand into prog rock and jazz fusion areas at times, surround said musician/composer with an amalgamation of skillful musicians as support and you have produced Celestial Fire, a stunning album that you should not hesitate to add to your collection.

Key Tracks: Celestial Fire, For Such A Time As This, On The Edge Of Glory

Tracks:
Heavenfield
Celestial Fire
See What I See
The First Autumn
For Such A Time As This
Innocence Found
Love Remains
In The Moment
Heavenfield (reprise)
On The Edge Of Glory