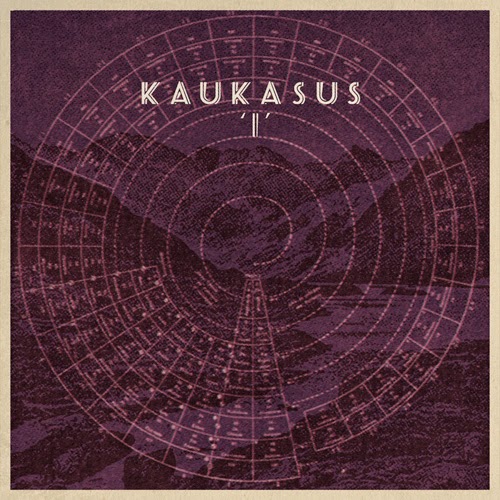 This release arrived on my desk a short while ago for review, but I was already aware of the band, Kaukasus, and indeed, had already aired a couple of tracks of ‘I’ on my radio show. The band was initially formed as an experimental project into the Krautrock style of music, but evolved into modern, dark, Nordic progressive rock, containing subtle, and sometimes, not so subtle hints at Krautrock, Art Rock and World Music. Influences have been drawn from such diverse bands as Japan, Genesis and Can, to name only a few.

The opening track to the album, ‘I’, “The Ending of the Open Sky” (5:34) has some very atmospheric flute as an introduction, together with some synths in the background. The drums then enter and some breathy vocals before there is a great riff on the guitar. Rhys vocals are amazing, so clear and powerful and riding high over the background. The drums continue to underpin the track and drive the music along. Around the 2:30 minute mark there is a little passage that almost enters the discordant with the sax playing but the general feeling of excellence is maintained. There is then a return to the flute led passage and back to the vocals by Rhys. There is then a little bit of double tracking on the vocals, the drumming by Matthias is superb throughout the track and the flute, and saxophones, provided by Ketil are excellent. Around the 5 minute mark the vocals and the drumming disappear and an atmospheric soundscape takes the track out.

Track 2, “Lift The Memory” (8:53) sees Matthias’ drumming providing the start point for the first 30 seconds before the track bursts into life. Rhys vocals are again clear and powerful and the lyrics are easily followed. Around 2:30 minutes there is a total change with the instruments dropping away and the track then moves into a very jazzy veined section powered by the drums and Rhys vocals continue to drive the track along. This track is certainly one that conjures up thoughts of David Sylvian (especially when he recorded as Rain Tree Crow). The sound that these 3 musicians can generate is excellent. This track has quiet passages, but every so often, it seems to throw in some “killer” hooks. The breathy whispered lyrics, which are just about understandable at points adds to the atmosphere. Around the 5 minute point there is an aural soundscape which takes over with a plaintive passage and a synth that enters and leaves in the background. This is a simply stunning section of a magnificent track. By 6:30 minutes, the track is into some heavy riffing and then into the main theme again before the track takes its leave with a gentle fadeout for the last minute or so.

“Stillness Of Time” (5:57) starts with the piano, bass and terrific drums with Rhys voice over everything. There is very simple drumming with synths appearing initially and then the power kicks in with a heavier, almost muddied, background. A return to the sparse drumming, which also conjures up the sound a train generates, and the piano, heralds the return of the vocals. Around 3:30 minutes there is a terrific synth passage which drifts into a gentle soundscape. Atmospheric is a word that comes to mind frequently and this soundscape takes the track out with some extraneous sounds away in the background.

“Starlit Motion” (5:21) is a synth led haunting melody, with the synth “painting” a scenario which seems very bleak, until another synth can be heard bubbling away underneath and this is soon joined by some superb flute from Ketil. The sound is very reminiscent of the Snow Goose era Camel. Ketil continues to push the track along before more synths build up a melody again, again joined by the flute and the feeling is that of very early Kraftwerk territory. This is the type of instrumental that pulls the listener deep into the track and demands that they hang around to enjoy everything the track has to offer.

“Reptilian” (9:10) is the longest track on the album and starts in a sort of Eastern style which merges into drums and saxophone prior to the entry of the vocals by Rhys, which moves from channel to channel on alternate lines. Synths carry the track along with more Mattias magic on the drums and the sound builds into a mélange of Eastern bits and pieces. Breathy, almost inaudible lyrics paint another excellent soundscape before the track builds up again and into the mélange mentioned earlier. The shift in the use of percussion in different areas is stunning in its simplicity. Guitars, from Rhys, help to build the atmosphere in the track. If there is one area that is slightly disappointing with this particular track, it is the very repetitive vocalization which can “drag” a little. From 7:30 minutes, there is the setting of another haunting aural soundscape which escorts the track out.

The penultimate track, “The Witness” (4:18), is the shortest track and starts with guitar and flute with the synth adding little flourishes. The deep, clear vocals provided by Rhys explain the tale of the witness and the addition of a pedal steel guitar passage adds another level to the track. The feeling within “The Witness” is that of a sparse barren scenario, but at just over 4 minutes, it appears close to perfection.

“The Skies Give Meaning” (8:06) is another chunk of haunting atmospherics, with flute, drums and percussion all dovetailing into place. The track slowly builds with layers appearing and disappearing until around 3:30 minutes when a “cloak of heaviness” descends. This time, Rhys voice seems to be in a battle with the instruments to determine the victor. “Reptilian,” as mentioned, was a little disappointing. “The Witness” turned that around into near perfection leaving the final track a lot to do to keep the flow going, but unfortunately for some reason, it misses the bull’s-eye. This last track just seems to lack the “je ne sais quoi” that was apparent in most of the earlier tracks.

Despite the bit of a letdown with the final track, this is a superb album. Very few albums can claim to be “perfect” throughout, apart from some Greatest Hit albums, and ‘I’ is no exception. ‘I’ needs to be listened to several times to fully appreciate what these 3 musicians have achieved. Both stickers appear on the cover of the Kaukasus album, “One to Buy” and “The Experience will last Forever” and my simple advice on ‘I’ is “get out there and buy this album,” settle into a comfortable chair and let the stunning artistry that is ‘I’ I wash over you.

Tracks:
The Ending Of The Open Sky
Lift The Memory
In The Stillness of Time
Starlit Motion
Reptilian
The Witness
The Skies Give Meaning