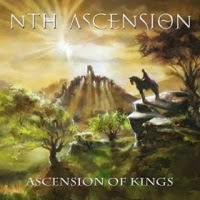 Following on from a debut album, Frequencies Of Day And Night, which was made available as a free download on Aurovine, the band, Nth Ascension, have recently released album No 2, Ascension Of Kings. The music on the debut album, released in 2011, had been likened to such bands as Grey Lady Down, Arena and Pallas.

The band, when the 2014 album, Ascension Of Kings was recorded, was a 5 piece unit comprising Martin Walker (guitars), Gavin Walker (bass), Craig Walker (drums, percussion), Alan “Spud” Taylor (vocals) and Daniel Treece Birch (keyboards). Unless there is a huge coincidence in the names, I might hazard a guess that the first 3 band members might be related.

The album, Ascension of Kings, is an 8 track release with a total running time of around 57 minutes. The final track, “Vision,” is the longest track at 18:44 minutes and track 2, “Return Of The King” is the shortest at under 4 minutes (3:44). Tracks 4, 5 and 6, although separate, form parts of a trilogy, with “Overture,” “Realm With A Soul” and “Seventh Rider” being subtitled Clanaan Parts 1, 2 and 3 respectively.

“Fourth Kingdom” (6:21), the opening track on Ascension Of Kings, starts with a little soundscape with wind whistling, but quickly moves into some excellent work on the drums and bass and a little hook being played on the guitar. The feeling of the track is reminiscent of Thin Lizzy and the guitar riff, and drum/bass powerhouse hinted at a subdued Black Sabbath. This is an excellent track that moves along with a feeling of aggression bubbling just under the surface, but the great achievement is that this “hidden” aggression is controlled and never allowed to “escape,” which results in a very classy piece of work to open the album. In the latter half of the track, the keyboards are allowed some time in the spotlight and this just adds the perfect finishing touch.

Tracks 4, 5 and 6, “Overture” (6:08), “Realm With A Soul” (3:51) and “Seventh Rider” (4:00), as mentioned earlier form the Clanaan Trilogy. “Overture” is the scene setter with a superb soundscape being “painted.” The sound builds with keyboards playing a subtle little theme, with synths adding flourishes now and again. An almost choral effect is generated and the listener is left to use their imagination as to what they think is happening. At around the 2:30 minute mark the drums enter and the track moves up a gear. The simple theme is repeated, morphed slightly and then returns, all the while emanating waves of magnificence. As the music moves into “Realm With A Soul,” it initially seems to be setting a darker style piece of work, but with a sudden synth flourish, an acoustic guitar takes up the reins and is joined by some very gentle delicate vocals. This is a passage of great harmonizing with some superb synth fills in the background. The final part of the trilogy, “Seventh Rider,” bucks the general trend of multi-sectioned tracks by refusing to become a full blooded reprise of the early theme, and instead makes the third part a thing of delicate beauty. Some superb playing with excellent guitar flourishes makes the final part of the trilogy little short of stunning. Increasing intensity builds the music before the guitar theme reappears. These three tracks flow together so well and show that Nth Ascension have the writing ability and instrumental techniques to become one of the bigger players in the world of progressive music.

The final, and longest, track, “Visions” (18:44) once more starts off by setting a barren, sparse scenario, but without any warning, the track abruptly changes to a full band workout. This is a track that initially drives along with touches of light and dark and a powerful vocal. Slight touches of the metronomic drumming style appear, but the excellence of the music refuses to let the track flounder on this. From around the 6 minute mark there is a long instrumental section, driving guitars, soaring keyboards and synths and amazingly solid power being generated from the drum/bass duo. A more acoustic passage is escorted around the 11:30 minute mark, just prior to the reappearance of the vocals at 12:00 minutes. Another 30 seconds and there is more guitar work with a “wind” in the background, and this continues to wash along taking the track on an elongated exit. A louder vocal kicks back in around the 17 minute point as the albums second tour-de-force is allowed to slowly fade into nothingness.

I always look upon my reviewing as a chance to come across some excellent new material. Reviews for well-known bands are great, but one is aware of the standing of the band and to some extent, this “colors” the expectation. Once in a while, a new name just nails it and literally blows you away. Ascension of Kings by Nth Ascension, is just such an album, where from the word go, you are pulled into the places the band want you to be and treated to an amazing statement of musical skills, each track seeming to take you further into their world. The advice is again simple, you should clear a small space on your CD shelf, as I can guarantee, with close to 100% certainty, that once Ascension Of Kings has been heard, you will immediately part with the necessary shiny coins to allow you to own it.