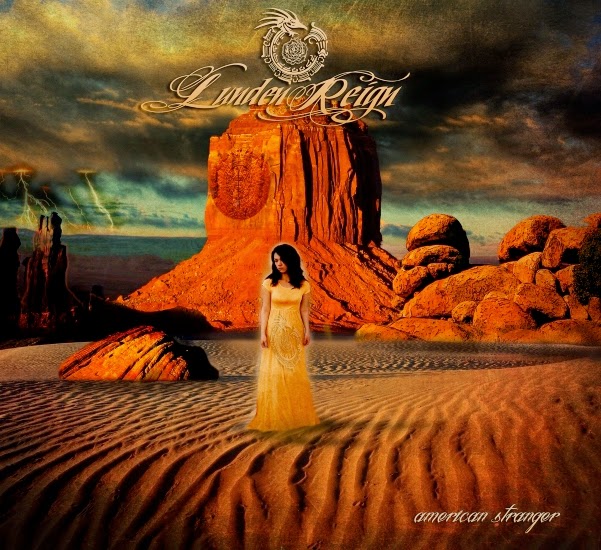 Los Angeles, CA - One of the most eagerly anticipated releases of 2015, the debut concept album by Lunden Reign titled 'American Stranger', featuring Lora G and Nikki Lunden, will be released in March. Recorded at Capitol Records in Hollywood, Abbey Road (Studio 2) in London and Stagg Street Studios in LA, Lora and Nikki are joined by platinum-selling producer/composer Luis Maldonado (John Waite, Into The Presence, Lisa Marie Presley), mix engineer Geoff Pearlman (Linda Perry), Morgan Young on drums, Hector Maldonado (bassist for Train) and Cellist Ana Lenchantin (Queens of the Stone Age, The Eels). Lunden Reign was recently chosen as TAXI MUSIC's 'Exclusive Artist of the Month', a great honor from a company with thousands of artists on their roster. (http://www.taximusic.com). Lunden Reign also has signed a distribution deal for 'American Stranger' with Cleopatra Records in Los Angeles. The album will be released on March 17, 2015.

Nikki elaborates about the album's concept, “ 'American Stranger' is a complete story from end to end. It was designed to be a sort of 'rock opera' about intolerance and those willing to stand up to it as well as those it's destroying. The central character is 'Mary' (song #7), a young woman who feels isolated, misunderstood and so disconnected from the world 'I want so hard to be set free, from everyone that judges me. I want to live a live someday, a world away from yesterday.' The song 'Mary' is prefaced by '28IF', 'Hear Me' and 'American Stranger'. In the end she overcomes in 'Hush and Whispers': 'Who cares what I am, it's all insane stop trying to change my life.'”

LORA G (Espinoza-Lunden) is a Composer/Guitarist from Mission Viejo, CA. Lora has a love of composing lyrics with a solid message and music in open-string alternative style. She is also a parent and an activist for the Mexican-American and LGBT communities. NIKKI LUNDEN is a Singer/Songwriter & Multi-instrumentalist who is a 18 year veteran of live performance (solo and ensemble). The Iowa native originally from Franklin, Iowa (pop.143) moved to LA in the fall of 2012 to attend Musician's Institute in Hollywood. Lora G and Nikki Lunden are the core members of Lunden Reign. Currently their lineup includes Matthew Denis - bass, Steve Ornest - guitar and Morgan Young – drums.

Already some of rock’s legends have joined Lunden Reign on stage including PRESCOTT NILES of THE KNACK and DALE BOZZIO of MISSING PERSONS. Their forthcoming album 'American Stranger' (completed and now in pressing) was mastered by Grammy winning Evren Goknar at Capitol Records, Hollywood., with art design and cover design by one of rock’s greatest album designers: IOANNIS. Lunden Reign proudly endorses & records with HIWATT AMPS, UK.

Lora explains how the band recently connected with legendary Dale Bozzio of 80's hit-makers Missing Persons, “Beyond being a legendary singer and composer, Dale is amazing person and a wonderful human being. We met Dale after the great bassist from The Knack, Prescott Niles, performed with us at The House of Blues, Hollywood. Prescott is also the bassist for Dale Bozzio's Missing Persons Band. Dale clicked with us immediately and she guest performed with Lunden Reign at both the LA and Long Beach Pride Festivals.”

Prescott Niles (bassist - The Knack, Missing Persons): “Every so many years an album comes out that redefines modern music. 'AMERICAN STRANGER' is that next album. Grab some headphones, close your eyes and let your senses explore the music & lyrics of Lunden Reign’s sound. Today the cycle goes full with a long-awaited return to music that touches the soul and embraces the test of time.”

Martha Davis (lead singer of The Motels): “The song 'Hear Me' is wonderful & heartfelt.”

In closing, Lunden Reign is more than just music; their lyrics carry important messages about tolerance, love, self-reflection, dignity and inner- strength. 'American Stranger' stands up to intolerance, telling stories about becoming a victim by simply trying to claim ones own identity. It's feeling like a stranger in your own skin and finding the courage to be exactly who you are. There is a re-occurring character, Mary, who represents all of these things. This is her story - how does it relate to yours?”