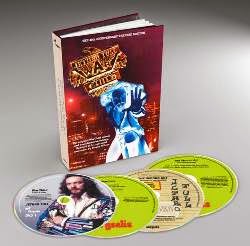 I really enjoy covering these anniversary reissues of the Jethro Tull catalog. Although it seems like an eternity ago that these albums were first released it is still an enjoyable experience to hear the music in a different way if you are a big fan of the band.
With the 40th Anniversary of War Child (1974) I was transported back to the time I was in the Columbia Record Club and this very album was part of my membership package. It quickly became one of my favorite albums to spin on my little stereo system. Of course now I have my laptop, phone, tablet and a surround system that I can use to hear music. The different configurations of the album offered in the set make it unique. This music pops out at you with crystal clear definition like never before due to the care taken in the remastering process.

War Child was a highly underrated album and I believe it stands up well today as one of Jethro Tull’s strongest outings. With Minstrel In The Gallery coming out in May as another amazing 40th anniversary reissue I am sure I will find myself saying similar things. That is another strong release that I played often and realize today how underrated it was.

The 70's was Jethro Tull’s strongest and most creatively fertile period. That is a matter of my own opinion however although I think many folks would agree. There is not a bad track on the album.

This is a beautiful set in a book format/case with 2 CDs and 2 DVDs. Steven Wilson continues to apply his studio wizardry to the catalog and does a fine job. The set includes original album and bonus tracks (three previously unreleased), remixed in 5.1 surround and stereo versions and perhaps the most interesting and intriguing segment of the set,  the 10 orchestral pieces (nine previously unreleased) written for the film’s soundtrack which never saw the light of day until now. Four of the tracks are remixed in 5.1 surround and stereo by Wilson and when you hear them in that context it serves as a revelation of sorts. There were big plans for the full on production of the album and stage play but it never happened; 40 years on we finally get to hear what they had in mind.

“The Third Hoorah” promo footage from a January 1974 photo session/press conference where the War Child project was announced is included. It serves as an interesting bit of the bands history and is fun to watch. Ian Anderson updates the listener with his typical witty commentary as the soundtrack.
The 80-page booklet featuring an extensive article on the preparation and recording of the album, a film script synopsis, track-by-track annotations by Anderson, plus rare and unseen photographs are all part of the complete package.

War Child was a superb rendering of progressive rock and remains so. With this remastered set in all the different formats and bonus tracks makes for quite an adventure and it most certainly will give the release new life and a boat load of fans to come onboard the Jethro Tull remaster train. All aboard folks Minstrel in the Gallery is right around the corner! It’s time to paralyze the pumpkin eaters…

Key Tracks: War Child, Skating Away on the Thin Ice of the New Day, The  Orchestral  War Child Theme