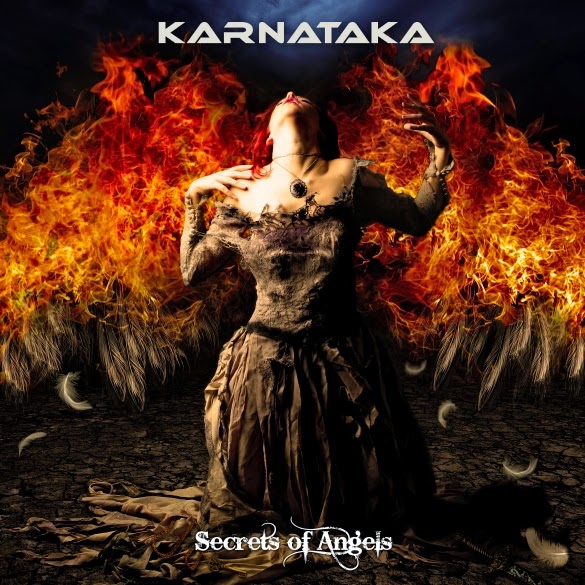 London, UK - 'Secrets of Angels' is the eagerly anticipated new album from UK rock ensemble Karnataka. Featuring eight brand new tracks and showcasing a more dynamic and symphonic direction, the new album propels the band to powerful and majestic new highs. Recorded at Peter Gabriel's Real World Studios and Quadra Studios in London the new album explores themes from despair, anguish and the futility of war to love across cultural divides and culminates in the 21-minute opus and epic title track, “Secrets of Angels”. The music was written over a period of two years following on from the band's last tours in 2012. The new tracks showcase a more dynamic and symphonic direction.

The album embraces several interlinked themes - temptation, lust, secrets, darkness, division and betrayal but with a constant underlying message of searching for an inner strength, to battle through when hope is lost or emotions are at their weakest, 'to step free from shadows cast'…. a sense of defiance that always wins through. Says bassist Ian Jones, “There are threads running through the album. The title track 'Secrets of Angels' has a theme of war through the ages – the futility of war – told through the eyes of two people. The despair and anguish experienced. 'Secrets of Angels' refers to the secrets a person takes to the grave… 'Road To Cairo' is a love letter to Egypt as a country but it also has a personal theme about love across religious and cultural divides. ‘Forbidden Dreams’ is about temptation and passion. ‘Poison Ivy’ is about betrayal, anger, danger...

The album features guest appearances from Nightwish's Troy Donockley on uilleann pipes and whistles, one of Ireland's top young harpists Seána Davey and a string section from the Royal Philharmonic Orchestra.

Karnataka rose to the forefront of the female-fronted symphonic progressive rock scene with the release of their landmark album 'Delicate Flame of Desire'. Their follow up and critically acclaimed album 'The Gathering Light' won best International Album at the World Prog awards.

The band features an international line up of world class musicians. The beautiful voice of enigmatic lead singer Hayley Griffiths (Riverdance, Lord Of The Dance), the virtuoso fretwork of Italian guitarist Enrico Pinna, the melodic driving bass of Ian Jones, the innovative and symphonic orchestrations of Turkish keyboard player Cagri Tozluoglu all powerfully driven forward by the dynamic drumming of French sticks man Jimmy Pallagrosi. Together they create a beautiful tapestry of sound that transcends musical boundaries and showcases the band‘s sublime songwriting and musicianship all of which have won plaudits from Radio 2's Bob Harris, Rick Wakeman and many others.

The band's powerful live performances have entranced and captivated audiences across the UK, USA and European mainland and also seen them perform alongside prestigious artists such as Robert Plant and Porcupine Tree. Karnataka will be launching the album with a full UK tour in March 2015.

Tracks:
Road To Cairo
Because of You
Poison Ivy
Forbidden Dreams
Borderline
Fairytale Lies
Feels Like Home
Secrets of Angels

In closing Ian has this to impart, “We hope you enjoy listening to the new album as much as we enjoyed making it. Every Karnataka album is a labour of love and 'Secrets Of Angels' is no exception. We’re very proud of our new creation – time to let it loose! We've explored some darker themes in the new album… temptation, lust, secrets, darkness, division and borders and betrayal but also war… we're all living in a time of constant war… many experience the loss and anguish first hand… for others it has become a white noise constantly in the background of our lives. Writing about war is a sensitive and difficult issue – the temptation is not to try… but we didn’t feel we could ignore it. The title track 'Secrets of Angels' is about the futility of war - the anguish and despair – war through the centuries seen through the eyes of two people. A repeating theme is division and borders… both personal and cultural – another theme that is touching many today.”