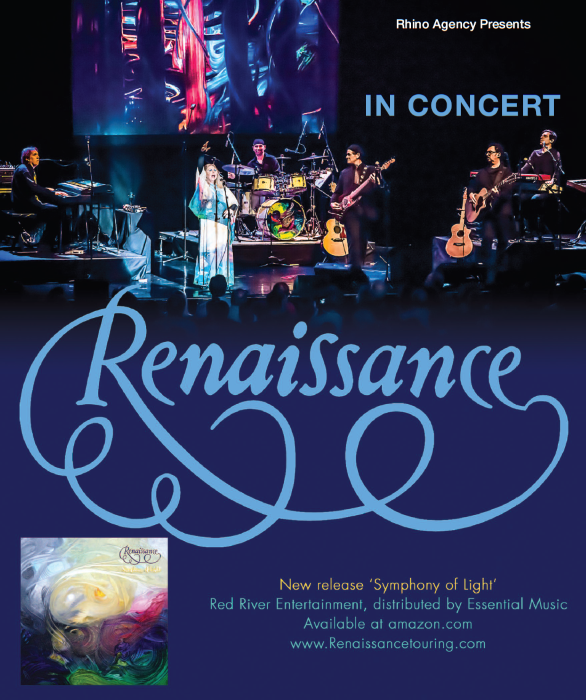 London, UK – Much to the excitement of music fans in the UK, progressive rock icons Renaissance featuring legendary singer Annie Haslam will be performing in the UK in April 2015! Renaissance is a band with a rich history unique unto themselves as progressive rock pioneers who rose from the ashes of the seminal UK rock band, The Yardbirds. Acclaimed for their unique blending of progressive rock with classical and symphonic influences, the band's career has spanned forty plus years spearheaded by the 5 octave voice of Annie Haslam and the masterful songwriting skills of Michael Dunford. They are widely considered to be the band that most successfully and routinely utilised the sound of a full orchestra in their recordings.

“In April of this year we will be touring Europe for the first time in over thirty years and we are all extremely excited. It is our goal to chronicle this journey by filming and releasing a new live concert DVD.” - Annie Haslam

In the early years Renaissance toured Europe extensively. It wasn’t long before influential progressive rock stations in the US, such as WNEW (NYC), WMMR (Philadelphia) and WHFS (Washington) were turning on America to Renaissance. Before too long the band started thrilling concertgoers on the world’s most distinguished stages, from Carnegie Hall in NYC with the New York Philharmonic Orchestra, to the Royal Albert Hall in London with The Royal Philharmonic Orchestra and Royal Chorale Society. In 1978 they had a top ten hit in the UK with ‘Northern Lights’, which has become a classic radio favourite, still demanding regular airplay to this day.

The band eventually disbanded in the late 1980’s at which time Annie Haslam launched a solo career. In celebration of the 40th anniversary of the original founding of Renaissance, Michael and Annie in 2009 decided to form a new touring band. More recently they have toured North America, Canada, Japan and South Korea and produced their first album in 13 years entitled ‘Symphony of Light’. The album is a testament to the unforgettable melodies that Michael Dunford infused into his work, Michael died prematurely in 2012.