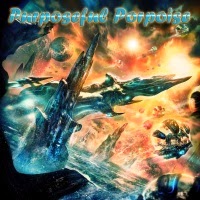 This is another of those gems that would have missed the prog radar of this reviewer. The album, Purposeful Porpoise, should I have come across it in a record store, would probably not have been looked at, and that would have been a huge loss. The band, also Purposeful Porpoise, isn’t a supergroup in the true sense of the word, but is a super group in that, despite today’s digital knowhow, the members of this band all head to the studio together, and record together rather than send individual completed parts from various parts of the world. This does have an effect on the way the music will evolve when recording.

The debut album from the band, Purposeful Porpoise, is a concept album dealing with the futuristic aquatic world, Nommos, where the inhabitants are dolphin-like bi-peds, living peacefully until their power source is stolen and transported away. This launches a battle between the two inevitable sides, Good and Evil. This is a quest for survival in a world occupied by Air Pirates, warriors, mystics, savages, villains and saviours. This is the very fabric of classical progressive concept albums, such as, Olias of Sunhillow by Jon Anderson. (1974) Purposeful Porpoise, the band, is a 5 piece group comprising, Alex Cora (lead guitar, vocals), Vinnie Colainta (drums), Derek Sherinian (keyboards), Ric Fierabracci (bass) and Ginny Luke (violin). There are also a few guests on the recording, Gustavo Farias (moog solo), Matt Linsky (guitar solo), Collette Von (vocals), David Kirsch (vocals) and Luke Tierney (vocals).

Purposeful Porpoise, the album, is a 9 track double album, with a total playing time of around 83 minutes. The longest track, also the opening track, is “Crossing Into The Unknown” is an epic reaching out towards the 21 minute mark (20:47). The shortest track on offer on the album is “Which Way Is Up” at only 4:22 minutes.

Opening with the epic 20+minute “Crossing Into The Unknown,” the album gets off to a flyer. There is a simple acoustic guitar start with some violin, bass and synth joining in. The drums then herald a stunningly memorable passage by the violin/synths. This theme ebbs and flows then the tempo changes allowing the entry of the vocals in a passage that is a much more driving passage. The interplay between the male and female vocal fits like a glove, with the vocals both clear and harmonious. The violin is an ever-present instrument, ducking and diving around in the background. Around the 3:30 minute mark, there is an echo put onto the voice to act as the “narrator” before the vocals move back to the male/female interaction. The violin picks up the intensity of the sound as the track enters another varied passage of acoustic guitar and violin. The superb aural landscape being painted is left to the imagination of the listener. Just on the 7 minute mark there is a very simply, but catchy, acoustic guitar which announces the arrival of a symphonic synth theme, plus more “informative” styled vocals. The violin work provided by Ginny continues to be a foundation of the track and at times is very reminiscent of Darryl Way (Curved Air). Not to be outdone there is some amazing guitar work and, at times, excellent piano passages. The early themes are returned later in the track and then there is an almost spacey-like section which appears without warning. As an opening track to an album, this definitely has all the credentials, and you almost want to hear the entire track again before moving on.

“Nowhere Bound” (5:46) starts with acoustic guitar and some excellent vocals before the violin adds depth in the background. Some stunning synth and guitar allow the track to grow and build. This is a mid-paced track that slowly gets into your head as it effortlessly flows along. There is a superb synth passage before the original themes reappear and the synth appears again as the song starts to take its leave.

The final track on the album has one of those “let’s pretend to be tuning up” style starting points, before the track proper kicks in around 60 seconds. Driving guitars, both electric and acoustic, bass and drums are supplemented by crystal clear forceful vocals. The tempo changes into the third minute with an insistent synth adding power to the vocal before a return to the starting tempo. This chop/change tempo continues as the synth reappears, until a very different synth passage soars away at the 4:45 minute point, starting deep in the background and then just slowly rising. Guitars then get a little time in the limelight before the violin provides another excellent passage. The bass gets a chance to have its say in a little solo, but I hoped that we wouldn’t get a drum solo, but I was wrong. Unfortunately, I really don’t think that a drum solo adds in any way to the flow of the music. The song ultimately fades out in a mish-mash of instruments after a voice explains the outcome of the Good versus Evil battle.

All in all, Purposeful Porpoise is a very creditable debut album, which has some simply awesome passages, but as with many concept albums, the storytelling can provide some musical pitfalls, which simply don’t work well as well. Having said all of that, Purposeful Porpoise is a very satisfying listen and is well worth giving up 90 minutes of your time to check it out. At the end of that 90 minutes, you will then have the choice to either buy the album or not, but I will certainly use the music on the radio show and listen to this album many more times.

Tracks:
Crossing Into The Unknown
The Air Pirates
Unexplained
iPhones
Lost
Serena’s Song
Nowhere Bound
Which Way Is Up
Cycles