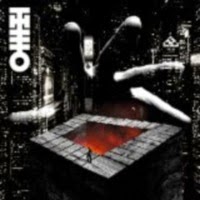 Yet again, The Ancient One has been fortunate enough to be asked to review an artist that I would have been unaware of, and Theo, with the release of The Game of Ourobouros is a gem of an album.

The Game of Ourobouros is a solo album by Jim Alfredson, who is best known for his work with the acclaimed jazz trio, Organissimo. A stirring of his affection towards the classic era of prog rock, inspired by the classic artists such as Yes, King Crimson, Pink Floyd, ELP and Genesis, led to this album appearing.

Writing for the album began as far back as 2010, but due to Jims’ heavy touring commitments, the album only saw the light of day earlier this year. Between these dates, Jim had appeared on two releases by the blues artist, Janiva Magness (as well as also touring with her), released two albums as Organissimo and a solo jazz project entitled, Jim Alfredsons’ Dirty Fingers, meaning that time for the solo prog album was stretched out over 3 years.
As is the norm with the majority of solo albums, there are always a few guest musicians who appear on some of the tracks, or a band put together to complete the album and in this case, it was the latter scenario. The band on The Game of Ourobouros comprised Jim Alfredson (keyboards), Gary Davenport (bass), Kevin DePree( drums, percussion) and Jake Reichbart (guitar).

The Game of Ourobouros is a 6 track album with a total playing time of around 57 minutes. Track 3, “Creatures of our Comfort” is the shortest track at 6:51 minutes and the penultimate track, “Idle Worship” is the longest at 13:28 minutes.

The Game of Ourobouros is a concept album based around a “dystopian future where all the identification required is your selfie-chip” and the ongoing ethos that a “passive citizen is a happy citizen.”

The opening, and title track, “The Game of Ourobouros” (9:41) starts with one of those automated voices stating “You have reached…..press button 1” and so on, ending with the infuriating “I’m sorry, all our service representatives are busy at this time.” At this point the real music kicks in with chunky guitar and some sublime piano. When the vocals enter, my mind whispered quietly, Steely Dan, mainly due to the effortless vocals being produced together with the laid back melody. There then follows a tremendous passage with interactions swinging from keyboards to guitar, to vocal breaks and then back. Around the 5:30 minute point, the sound drops away and a solo synth introduces more stunning piano work. The sound then builds with drums, bass and synths before the vocal reappears, but this time in a more formalized spoken form as the acoustic guitar also briefly appears. At the 7:45 minute mark, the band burst back into life and the guitar just flies. The keyboards then take front of stage and the track heads towards its finale. This is an excellent opening track that ends with the automated voice stating “thank you for your continued patience” as the track segues into track 2.

“The Blood That Floats My Throne” (8:18) enters with the voice informing us that “a passive citizen is a happy citizen” and a synth background. Another synth appears and floats over the top, then disappears, before returning to herald the entry of the vocals with some very fine percussion also adding to the soundscape. The slight echo on the voice and some bits of double tracking lead into more of that chunky guitar style and the starting synth theme is always there or thereabouts. Jim lets his keyboards soar around the 4 minute mark and then there is a stripping back of sound with a gentler keyboard passage. The 5:30 minute mark sees the band begin building the intensity level up and this leads into another keyboard passage prior to more of the excellent guitar work. The original synth theme returns to take the track out as the automated voice again imparts more info.

The opening two tracks bring to mind the albums by Hibernal, both of which I have reviewed, mainly due to the overall feel of the music and the use of synthesized vocals to set scenes. Although there is a similar feel to both Theo and Hibernal, both are unique in the way the concepts are expressed.

“These Are Simple days” (8:05) has an excellent piano intro leading to a simple fusion on piano and vocals. This is a beautifully gentle piece added to around the 1:30 minute point by the rest of the band and some vocal harmonizing. There is a slight increase in the intensity of the sound and then we are suddenly back to simple piano. Add in bass, acoustic guitar and then the drums to start to push the song along. At around 4:20 minute, there is a stunning synth passage from Jim which grows and grows. A simple guitar passage takes over around a minute later and the guitar and piano build together before gently fading away. After a few seconds silence, the starting passage reappears and the track eases its way to the exit.

The Game Of Ourobouros is an excellent release, and while the “main man” for the project Theo is a keyboardist, there is no keyboard overload. Throughout the album, the interaction of the keyboards by Jim and the guitar of Jake is something to marvel at. This is an album to give a few listens before it finally “hits” you, but at that point you will sense the urge to purchase a copy. Go get it.

Key Tracks: The Game Of Ourobouros, The Blood That Floats My Throne, These Are The Simple Days

Tracks:
The Game Of Ourobouros
The Blood That Floats My Throne
Creatures Of Our Comfort
These Are The Simple Days
Idle Worship
Exile