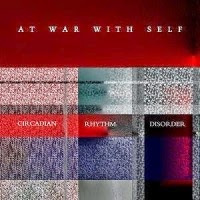 At War With Self is a project led/conceived by Glenn Snelwar, a multi-instrumentalist, best known, although not by this reviewer, as one of the guitarists on the Giordian Knot debut which featured members of King Crimson, Cynic, Watchtower and Dream Theater.

At War With Self has previously released three albums, Torn Between Dimensions (2005), Acts of God (2007) and A Familiar Path (2009), and now, album No 4 has landed on The Ancient Ones’ desk for review. The title of the newest release is Circadian Rhythm Disorder.

To quote the press release that accompanies this album release, “Circadian Rhythm Disorder is the culmination of four years of writing, recording, re-writing, analysis, re-analysis, discarding, rebuilding, e-evaluation and final culmination of compositions based on the framework of a 51 minute drum solo performed in a single take by Marco Minneman (drummer, composer, multi-instrumentalist with Steven Wilson Band and Joe Satriani Band).”

I will admit at the outset of this review that the thought of a 51 minute drum solo filled me full of foreboding, but I was interested to hear how Glenn built Circadian Rhythm Disorder around this base point.

The musicians involved on this release are Glenn, who plays guitars, fretless bass, mandolin and keyboards, with Marco Minneman, providing the drumming and percussion.

The opening track on Circadian Rhythm Disorder, “Slate Wiper” (3:26) is an interesting piece of music based on the first section of the drum track. There is a fair amount of metal guitar riffing, interspersed with mandolin which draws the listener in, although the sudden change from acoustic to metal guitar can be a little jarring. This is a positive start to the album with a track that certainly hangs together very well.

“Seeds Of Doubt” (4:19) has a very atmospheric build-up to around the 2 minute point before the metal guitar appears in the background and takes over with bursts of machine gun like riffing, which unfortunately isn’t a style that keeps the interest of this listener.

“Seeds Of Love” (3:47) changes tack with piano and acoustic guitar setting the scene before the keyboards fill in the background. A good track, and indeed, I think the best of these early tracks without a doubt.

“Shards Pt 1” (3:21), “Shards Pt 2” (2:17) and “Shards Pt 3” (0:55) are based around the less metallic side of the music, with “Pt 1” using acoustic guitar and keyboards to provide a gentle, almost laid back, flowing piece of music, which does have a few tempo changes, but it is always satisfying. “Pt 2” has a superb piano to start and is again, in the gentler of the musical styles across this release. There are some excellent acoustic guitar themes on offer over the length of this track. “Pt 3” again highlights the piano, but at under a minute in length, is too soon gone.

Having listened to this album several times over the last few weeks, I am still not convinced that I like or dislike it. Overall I’m very happy with the gentler, more atmospheric tracks, but a little put off by the harsh metal thrashing. This is an album I may well dip into from time to time, but only some of the tracks.

As usual, this is a very personal view of Circadian Rhythm Disorder, and I would always advocate that people have a few listens before making their mind up.