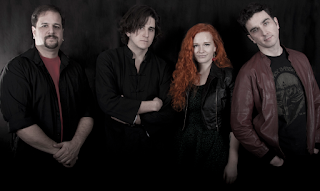 ‘Drifter’ to be released 1st June, followed by EP on 8th June

Folding the old school songwriting smarts of Fleetwood Mac into the contemporary edge of the Raconteurs, London based four piece Cherry White are an immediately impressive proposition. Their in your face indie-blues sound is highlighted by great hooks and high energy, blending genres in a way that sets them apart from more pigeonholed bands.

Currently building a buzz with their live shows in and around London, Cherry White have now taken to the studio to record a brand new EP, ‘Staring at the Sun’. Inspired by life in London during this austerity era, surrounded by the greed of the wealthy, the tracks circle around an aspiration to reach higher and achieve their goals in the music industry and beyond.

The EP is led out of the gate by single ‘Drifter’, which will be released on June 1st, one week prior to the full EP:  https://soundcloud.com/cherrywhitemusic/drifter
Video here: https://youtu.be/Bp7UAvkMf64

Engineered at Bark Studios by the excellent Brian O’Shaughnessy (Primal Scream, The Firm, My Bloody Valentine), the EP does a fantastic job of capturing the frenetic energy of a band who thrive on a live environment.

Cherry White’s live reputation was cemented at ‘Togfest’ in 2014, where their festival debut to a huge crowd was so well received they immediately sold out of albums. Having also taken to the stage at some of London’s top venues, including The Troubadour, Hope and Anchor (Islington) and Covent Garden Arts Theatre, their reputation in our fair capital is beginning to grow. Further afield, a BBC Wales live session a number of years ago proved there’s life outside the city for this eclectic group.

And with the single and EP on the way, Cherry White will be working harder than ever to make sure that reputation continues to grow into the music career they deserve.