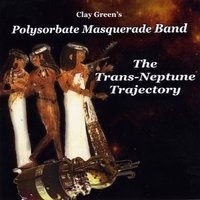 This is the second album I have reviewed from Clay Green’s Polysorbate Masquerade Band. What a superb name for a band, don’t you think? Indeed upon checking, The Trans-Neptune Trajectory, as the new album is entitled, is only the second release from the band, with Chronicles of Bubbledroid, the debut album released in 2005. I did the review on the re-mastered and re-issued Chronicles of Bubbledroid (collectors’ edition) which was released in 2012. For your information, Bubbledroid was the name given to Clay Greens drum machine.

The band themselves describe their sound as instrumental prog rock presented in the style of the early 70’s, with gritty organs, wah-wah guitars, intricate arrangements and differing time signatures. In an interview, Clay apparently likened the music to Arthur Brown’s Kingdom Come and Van Der Graaf Generator with a little PFM thrown in. My thoughts are that Clay Green et al should/could appeal to fans of keyboard dominated instrumental music, similar in vein to Camel and Focus with a slight nod towards Zappa/Capt Beefheart bands.

The band on the album The Trans-Neptune Trajectory comprises Clay Green (acoustic and electric guitars, digital transmissions), Edward Richard (bass, organ, other keyboards) and Dan Zalac (drums), who has replaced Bubbledroid from the debut release.

The Trans-Neptune Trajectory is a 6 track release with a playing time of around 35 minutes. The longest track is the final track on the album, “Scattered Disc” at 11:41 minutes and the shortest track on offer is “Remembering Bubbles” at 1:21 minutes.

The opening track, “Coronal Mass Ejection” (10:53) is a track which grabs the listener from the start with keyboards, great guitar and neat drumming. Time changes usher in some very jazzy passages which quickly evolve into a vehicle for highlighting the guitar and keyboards. Some really retro styled keyboards veer in and out at times. Melodic acoustic guitar passages lighten the sound at times, continuing the “drawing in” of the listener. Around 5:30 minutes there is the entrance of some wah wah organ and you are transported back in time. Themes reappear with more/less emphasis as the track enters the second half. Just after 7 minutes there is a more electronic style with bubbling keyboards behind an almost Hawkwind style passage. Clay, Edward and Dan are certainly working very well together, forming an extremely tight little unit.

“Entropy” (5:36) starts by firing on all cylinders and continues to drive along, all the while with keyboard and guitar themes weaving in and out. Some superb acoustic guitar leads into a very jazzy sequence with excellent bass and piano/guitar around at times in the background. Time changes are common and by 2:40 minutes, there have already been 4 changes. The musicianship is at an all-time high on this track and the changing and swerving from one lead instrument to another never lets the listener drift. This track is like a mini “tour de force” and then it simply stops.

The third track “Bubbles” (1:21) starts with a vibraphone/xylophone (?) and some excellent distorted guitar riffs. An almost carousel style keyboard passage appears and then it has gone.

“The Uchalna Revision” (2:40) and the following track, “Antimatter of Fact” (2:44) remind me a little of the style of the bands like Zappa/Mothers Of Invention and Captain Beefheart/ The Magic Band. This is terrific music which changes direction so suddenly within the space of around 2:40 minutes.

The final, and longest, track on the album, The Trans-Neptune Trajectory, “Scattered Disc” (11:41), starts with a very laidback feel and an intricate guitar intro before the band, with keyboards featured, take the track on. Cue a swap to a guitar lead, then back to the keyboards and then onto a swathe of guitar/keyboard interaction. The track maintains the “out of left field” swerves and around 3 minutes, we are into a symphonic orchestral mini suite which carries the listener deeper and deeper into the music. Keyboards take the lead as the track swerves again around the 5 minute point and then returns around 6:30 minutes to the orchestral suite. There is even time to throw in a drum solo by Dan, which, as I am not a fan of such, is thankfully short, but allows Dan his solo moment in the spotlight. The track then builds up again with some superb guitar riffing juxtaposed with stunning keyboards themes. The last couple of minutes have a powerful drum/bass foundation with spacey sound effects eventually taking the track to completion.

This is another quirky release from Clay Greens’ Polysorbate Masquerade Band, which is a hugely satisfying collection of music. From start to finish, approx. 35 minutes later, the mind of the listener has taken a shuttle ride off in many different directions, sometimes changing tack so suddenly, a seat belt should be compulsory.

The Trans-Neptune Trajectory is an album that I think may divide opinion, and therefore although I find this an amazingly refreshing slice of superb music, as always, with a personal view, my advice is to grab a few listens to the album as I feel the effort will ultimately be rewarded.