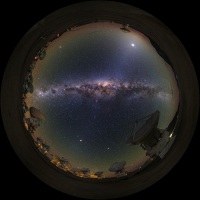 Exovex is a new progressive band formed by singer, songwriter and multi-instrumentalist, Dale Simmons. The debut album, Radio Silence, has recently landed on The Ancient Ones’ desk for review, and Dale’s credentials are very interesting. As a singer, songwriter, guitarist and front man for several bands since the early 90’s, he has traversed a wide spectrum of musical areas from prog/art rock through to jazz and funk.

The album, Radio Silence, has taken around 2.5 years to complete and release and as with many solo projects, there are a few guests to help the project along. The band assembled for Radio Silence includes, Dale (vocals, guitars, bass), Richard Barbieri (keyboards, synths), Josh Freese (drums), Keith Carlock (drums) and Gavin Harrison (drums). The three drummers are very experienced musicians, Josh with NIN, A Perfect Circle and Devo, Keith with Stings’ band, John Meyer and Steely Dan and Gavin with Porcupine Tree and King Crimson. The other guest, Richard on keyboards also plays with Porcupine Tree.

There is a concept running through the album and it focuses on the downward spiral and final demise of a man due to the physiological and physical effects of a long-term, self-imposed isolation.

Radio Silence is a 6 track album with a playing time of around 44 minutes, with the longest track, “Seekers’ Prayer” running on for 9:35 minutes and track 2, “Metamorph” is the shortest with a track time of 5:06 minutes.

As I have often pointed out, the opening track to an album has a key role to play, in that it has to set the scene for the rest of the album. How does the opening track, “Stolen Wings” (9:18) fill that role? The start of this track has some very subtle atmospheric setting sounds which slowly evolve into an excellent guitar passage. The rest of the band fills in neatly behind this as the vocals put in an appearance. The music paints an amazing aural soundscape and there are hints of old and new influences. The older influence would seem to be Pink Floyd/Dave Gilmour and the newer influence, that of Porcupine Tree (Richard and Gavin possibly?). “Stolen Wings” is not much under 10 minutes in length, but seems over far too quickly and has certainly grabbed the listener’s full attention. The track exits in a similar fashion to the start with those atmospheric sounds.

“Metamorph” (5:06) has an excellent acoustic guitar into electric guitar start, with the vocals appearing early in the proceedings. The lyrics are very clear and interesting, but the overall highlight of this track is the sublime guitar breaks.

A sound of morse code signals introduces “Seekers’ Prayer” (9:35), and another section of soundscape painting with bits of garbled radio voices in the background. Around the 2 minute mark, we are treated to some excellent guitar (a la Dave Gilmour) over a building background. The vocals appear as we move past the 3 minute point and fit the scenario perfectly. There are a few sections which up the volume and the power of the voice to continue the storyline, but like a security blanket, that guitar sound returns reassuringly.

“The Last Orbit” (5:51) has a piano/synth introduction that heralds in the acoustic guitar, as yet again a small smile of satisfaction crosses the listeners’ face. The vocals are treated to have a distorted/echo tone to them before reverting to “normal.” “Dead Reckoning” (5:21) has a very percussive start with more of the acoustic/electric guitar phrases. Double tracking the voices make this track different to those that have gone before, but surprisingly, I found that this track seemed to miss out on the “grab factor.” I’m not sure exactly why, but I found this the weakest track on the album.

Final track, “Daylight (Silent Key)” (8:30) restores the album to its winning ways. Superb guitar, excellent vocals and a terrifically atmospheric sound makes the disappointment of the previous track fade quickly. After a long midsection with more stunning guitar, the sound drops away around 6:15 minutes, leading into one of those excellent atmospheric sections which evolves slowly into an orchestral soundscape to take the album to its conclusion.

Overall, Radio Silence, is a stunning debut album by Exovex which is certainly worth adding to your collection. Check it out, hand over the money and on subsequent, and frequent, listens, allow yourself to contemplate where Dale might go with album No. 2.

Thought I would throw in a little explanation of the band title just before I go. The guest musicians were allowed to “do what they thought would best serve the song” and Dale comments that this “unknown creative variable” made Radio Silence what it is. A quick delve into mathematics for a moment, to explain that a “known function” in math can be written as f(x) and pronounced f of x, but if it is x(x) or x of x (Exovex) then the outcome is unknown. Here endeth the math lesson.