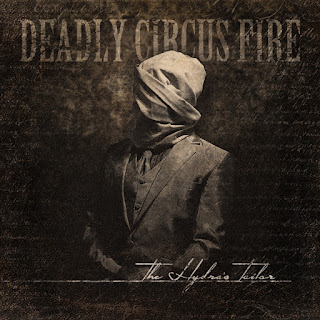 12 track album due on June 16th through Musicarchy Media

Described by Metal Hammer as “one of the most imaginative and formidable” prog bands currently plying their trade, Deadly Circus Fire are a London based band who thrive on getting stronger and stronger in their battle with the mainstream. Their sound has been compared to the likes of Tool, Mastodon and Deftones, mixing heavy guitars with melodious moments to create something special.

And it does take something special to turn heads at publications like Metal Hammer, as well as Classic Rock, who described Deadly Circus Fire as “one of the most striking young prog metal bands to come on the scene in the past couple of years". For a taste of what Deadly Circus Fire are all about, here’s the video for album track ‘House of Plagues’:

It’s clear that Deadly Circus Fire are a band who will make a mark on the metal music scene. They’ve already supported huge cult band Skindred on a European tour, counting it among their career highlights so far. They also previously caused quite a stir by performing in zombie clown make up.

In time though, the music of Deadly Circus Fire has evolved to speak for itself, making a huge impact both live and in the studio without the need for such on stage histrionics.

For more on the album, check out the video link below.