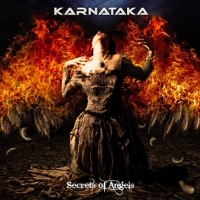 The new album from the band Karnataka, Secrets of Angels, has just landed on the review desk and is album No 5 from the band. The debut album was Karnataka (1998), followed by The Storm (2000), then Delicate Flame of Desire (2003) and finally, The Gathering Light (2010). Not the most prolific band, with 7 years between albums 3 and 4 and then a further 5 years between 4 and 5. One reason may be the ever changing personnel within the band. Ian Jones is the only original member of Karnataka from the mid 90’s, and while the same band members recorded Karnataka and The Storm, there was a change for Delicate Flame of Desire, with another female voice added (Anne-Marie Helder) as well as a female guest (Heather Findlay). The Gathering found only Ian still present, Lisa Fury as the vocalist, and new drummer, bass player and keyboard player.

The opening track, “Road to Cairo” (5:27) races out of the speakers and grabs you firmly by both ears. With a violin introduction, the track then moves into a heavy riff which conjures up little aural glimpses of Kashmir from the Led Zeppelin album, Physical Graffiti. The vocals of Hayley tower over this eastern tinged stunner. What a superb opening track which certainly makes you start to savor what other gems this album has in store.

“Because of You” (4:43) has a gentle piano intro into more of the heaviness, with riffs and orchestral thundering. Crystal clear vocals by Hayley soar with seemingly no effort and carry the track onwards. There is more emotional depth to this track than the previous one, and again a piece of music that hits the “sweet spot” in your mind.

“Poison Ivy” (4:14) fires up with more or the thunderous orchestral sweeps and maintains its pace throughout its 4+ minutes. Track No 4, “Forbidden Dreams” (5:48) is a more laid back entity, at least for Karnataka, and is memorable for that alone. A dip into the heavier, more powerful style of band statement takes the track onwards and embeds the melody deep within your mind.

“Borderline” (6:19) has a hugely atmospheric start, all dark and ominous, before Hayley’s voice demands attention, all the while backed by almost malevolent strings. The powerhouse of the band, the drums and bass are very obvious on this track. This is another stunningly memorable addition to the album.

“Fairytale Lies” (4:58) is a real change into the land of the ballad, with piano and strings. Hayley’s voice is so clear and powerful, and although the intensity of the track builds rises and falls, the lasting impression is of the gentler side of the band.

The penultimate track, “Feels Like Home” (7:06) has a theme plucked on the harp and when the voice kicks in, you relax into familiar Karnataka territory, although in this track the dark, ominous and malevolent soundscapes are omitted. Replacing these facets is an almost uplifting style of music, but I must admit that these last 2 tracks have not had the same impact that the previous tracks have had.

The finale to the album is the epic length title track, “Secrets of Angels” (20:00). Celtic sounds abound at the start of the track, courtesy of one, Troy Donockley from Nightwish, and an amazing aural soundscape is produced. The voice, when it appears, fits the storytelling scenario like a glove. Tension builds, heralded by the entry of some percussion, and you await the change happening, but you are kept waiting until about the 4 minute mark, when the full symphonic rock of Karnataka is unleashed. The track pulsates this way and that as it passes through each of its’ seven phases, allowing the band members to showcase their skills. A big plus point with “Secrets of Angels” is that the music flows seamlessly through all of its phases whether a full band workout or gentle Celtic areas, and there is always the little theme from the intro putting in an appearance in different ways. This is a true tour-de-force that ends the album on a majestic note.

This album, Secrets of Angels is a superb release and shows that Karnataka have undergone a slow evolution to get to this point. With so many personnel changes this achievement has certainly had obstacles to overcome, but I think that it is safe to say, that the band of Hayley, Ian, Enrico, Cagri and Jimmy, have finally “nailed it.”

My advice is very simple, and that is to listen to the epic final track, “Secrets of Angels” and you will soon be on your way to purchase the album. This is one of the best albums that I have heard so far this year, and I have heard a lot of albums this year.

Tracks:
Road To Cairo
Because of You
Poison Ivy
Forbidden Dreams
Borderline
Fairytale Lies
Feels Like Home
Secrets of Angels