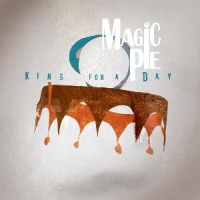 The Norwegian band is highly regarded amongst prog fans with their unique blend of classic prog and 70’s hard rock. The band have listed as influences a sort of Who’s Who of prog, including Spock’s Beard, Dream Theater, Genesis, Pink Floyd, Transatlantic, Yes, Deep Purple and more.

King For A Day is a 6 track album with a total playing time of around 72 minutes, which is a fair amount of music to put on a CD, especially with some releases under or just over 40 minutes. Listeners can however, rest easy in the fact that the quality of the music is very high, so not quantity over quality, just superb progressive music. The penultimate track, “The Silent Giant” is the shortest track on the album clocking in at 5:30 minutes and the final, title, track “King For A Day” is the epic tour-de-force of the album at 28:16 minutes.

“Trick Of The Trade” (6:18) is the opening track on King For a Day and has all the trademark sounds of Magic Pie, with a thundering start into stunning keyboards almost immediately. The vocals appear around 40 seconds and the music settles back a little before the track shifts tack just after the 1 minute mark. There are some harmonized vocals with keyboard flourishes that take the track on past the 2 minute point and to another switch. Superb guitar work carries the track on into another phase and a section of chunky guitar riffing. A return to an earlier passage brings the action down a little in intensity and we are back at a keyboard theme from the start plus much more keyboard work. The guitar takes over the lead for a section then relinquishes that position to the keyboards and some more vocal harmonies appear and we have reached 6 minutes, when the keyboards escort the track out. This is a cracker of a track to start the album.

“Introversion” (12:24) has an acoustic guitar intro into synths which is simply magical, before the band let rip. Superb vocals, excellent harmonizing and more chunky riffs abound. The guitar and keyboard passages are simply superb. The track moves into an amazing organ sequence around the 3 minute mark and is added to with more excellent vocals. There is a change of direction just after 5 minutes, with superb vocals and harmonies over guitar and piano. A minute later and we are back to the guitar and keyboards “showing off.” The music then drops away into the background apart from a simple passage that can be heard as a little aural oasis is provided. Moving towards the 9 minute point, there is a fabulous guitar solo which flows so well and then the other instruments pitch in and the band is back in action, while the guitar continues to fly. There is a change to a simple piano/synth passage before the band blast back and into amazing harmonies and guitar riffing before the keyboards gently finish the track off.

“According To Plan” (6:46) is a driving track highlighting the guitars and keyboards and never lets up for a moment. “Tears Gone Dry” (12:33) is a slow atmospheric burner which just builds and builds in intensity. The characteristic harmonizing and guitar playing are littered through this track. “Silent Giant” (5:30) has its heavy and light moments constantly pulling the listener into the music.

The closing track on the album, “King For A Day” (28:16) is of epic proportions and starts off very gently with a piano passage which morphs into synths and then full band very quickly. The guitar and the keyboards are again the driving forces of the track and little “hooks” start to appear all over the track. Changes in the tempo start to appear around the 5 minute point and the harmonized vocals, a characteristic of Magic Pie, appear. The retro organ sound floats around behind the voices but adds another level to the music. Reaching 8 minutes, the track has already moved in many directions, but is always nailed down by the foundations provided by the “engine” of the band, Lars and Jan on bass and drums respectively. The 10 minute mark has a majestic guitar passage that moves the track into a very laidback acoustic passage, including some very jazzy guitar as the track evolves into a more up-tempo keyboard passage, which is nothing short of stunning. The band then get to flex their collective musical muscles as the track drives along. Around 17:30 minutes, there is a jazzy passage featuring piano/synths, which escorts in a chunky guitar passage as the intensity starts to climb. 22 minutes into the track and there is a very atmospheric sequence with far-off sounds of people and sirens. The harmonized vocals reappear and the track builds as the guitar starts to fly as the track moves towards completion.

King For A Day is a superb release by a band that know exactly what they are about. Album No 4 shows that Magic Pie have again hit the bullseye, with soaring guitars, sweeping keyboards, thundering bass and drums and crystal clear vocals, plus excellent harmonizing. The band can produce atmospheric sounds, ballads, gentle acoustics and full on band interplay, between and within tracks.

If you have not listened to Magic Pie, my advice would be to do so as soon as possible. King For A Day will not disappoint.

I will end with a simple statement, “Welcome Back, Magic Pie.”

Key Tracks: Trick Of The Trade, Introversion, King For A Day

Tracks:
Trick Of The Trade
Introversion
According To Plan
Tears Gone By
Silent Giant
King For A Day