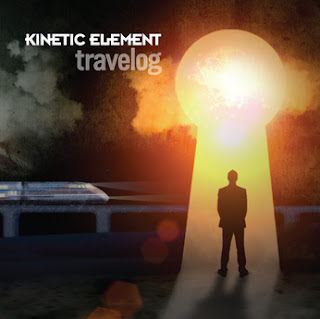 Richmond, VA – One of the most eagerly awaited albums of 2015 has finally been released by prog ensemble Kinetic Element titled “Travelog”! Kinetic Element is a neo/symphonic progressive rock band from Richmond, Virginia that harbors musical roots in classic artists like Emerson, Lake & Palmer, Yes, Asia and Genesis and blends those influences with philosophical and spiritually powerful and uplifting lyrics. They are a known act in the prog rock genre.

Kinetic Element's two principal writers, keyboardist and founder Mike Visaggio and guitarist Todd Russell, began collaborating on new music for the band towards the end of 2013 following the departure of two members. Deprived of the ability to play out, they decided to focus on composing and recording KE's second CD. They began working out sketches to five grand scale pieces of prog rock with founding member and drummer Michael Murray. Soon they had a working model of the album and began recording in earnest.

Says Mike Visaggio, “Although normally I prefer to let listeners ferret it out for themselves, the new album is most definitely inspired by current events. We believe that liberty is what humanity's preferred state of being is. The lyrics of the CD then are understood as standing up for that. The train imagery came to me when I heard the old song 'People Get Ready' which talks about a train to freedom. The design was the result of an image Martin Kornick did for us when we were looking to create a new logo last year, and we just applied that whole concept to the logo image.”

Kinetic Element was formed to perform the music of Mike Visaggio's solo CD, “Starship Universe” which was released in 2006 after Mike was selected to perform at the 2006 Pop Montreal festival. They are now performing selected classic prog and classic rock covers and their new prog pieces they have put together since they formed which comprise “Powered By Light” (2009) and their new CD “Travelog”. The cover art for both CDs was executed by the incomparable Martin Kornick. “Powered By Light” was nominated for Best Debut CD of 2009 by The Prog Awards, which was at that time an Italian reviews website. They were signed to Melodic Revolution Records at ROSfest 2013.

The band is comprised of Mike Visaggio (keyboards); Michael Murray (drums), Todd Russell (electric and acoustic guitar) and Mark Tupko (basses). In May 2008 the original incarnation of Kinetic Element was privileged to be a support act for Circa (featuring Tony Kaye, Alan White and Billy Sherwood of Yes, at Jaxx in northern Virginia), Rare Blend (at Orion Studios in Baltimore, Maryland one of prog's must-play venues), IZZ (who have played every prog festival in America, at the Artomatic festival in Washington, D.C.) In 2009, KE's Powered by Light lineup supported Morglbl (at Capitol Ale House Music Hall in Richmond VA) and in 2010, with Edensong (at Orion again). Kinetic Element opened the nation's longest running prog rock festival, Prog Day, at the Pre-Show on August 29, 2008 with Speechless and again on Sept. 3, 2010 with Jack Dupon. They played The Magic Room in Boston in November 2011 headlining, with support acts Eccentric Orbit and Resistor. In 2015 KE has headlined at Orion Studios again (May 29) with support band Brave, and supported Lo-Fi Resistance at New Jersey Proghouse (June 6). Kinetic Element was featured in Progression Magazine #59 in 2010.

Kinetic Element's new album “Travelog” was recorded by the band at their cavernous garage studio in Richmond VA with Michael Murray performing engineer duties, between December 2013 and February 2015. In May of 2014 bassist mark Tupko auditioned and joined as the band's fourth permanent member.

Unable to find a suitable vocalist in their hometown, Mike Visaggio reached out to their musical friends Odin's Court whose lead vocalist Dimetrius LaFavors agreed to perform the vocals for Travelog and join the group while remaining with Odin's Court. However Dimetrius could not continue due to changes in Odin's Court's schedule, and was forced to cease recording after appearing on three of the five tracks. Riding in to KE's rescue came Michelle Schrotz of Fredericksburg, VA's prog icons Brave, and stellar CProg artist Mike Florio, to record the remaining two tracks.

When Mike Visaggio let it out on Facebook that KE would be seeking a professional prog rock engineer to do the mix, he was approached by Fred Schendel and Steve Babb of prog legends Glass Hammer about engaging them to mix. The resulting collaboration produced the terrific sound you hear on Travelog. They also did the mastering at their studio Sound Resources in Chattanooga TN.

Early in the spring 2015, Kinetic Element was offered a show at New Jersey Proghouse for June 6, and all the production went into high gear in order to have product in hand for that show and another one that was booked for a week previous on May 29 at Orion Studios in Baltimore. Both shows came off well with Mike Florio and Michelle singing. However there are no shows on tap at this time because their vocalists do not live in Richmond, but are available if a suitable concert gig comes KE's way.

Kinetic Element's “Travelog” can be heard in its entirety at:
www.cdbaby.com/cd/kineticelement2 and http://melodicrevolutionrecords.com/album/travelog.

Here's what the press have raved about Kinetic Element:

“Instrumentally KINETIC ELEMENT is at the top of their game. The driving force behind the group is keyboardist Mike Visaggio who is positively brilliant, some of the most energetic keyboard work I've heard since the Golden Age of Progressive Rock when Wakeman and Emerson were producing their best work. Yes, he's that good. And his surrounding cast of players are equally adept.” - ProgNaut

“Fans of progressive rock in all its forms - including Transatlantic, Neal Morse, Tiles, KDB3 and Proto-Kaw - will find a lot to like here.” - Angelic Warlord

“The musical expressions in this release could only come from highly-intelligent lifeforms. Much of its mimicry is provided by organs, Mellotrons and synthesizers, and its artificial sheen has an uncanny resemblance to Transatlantic.” - Ytsejam

In closing Mike Visaggio has this to impart, “Prog Lives! It keeps us young.”