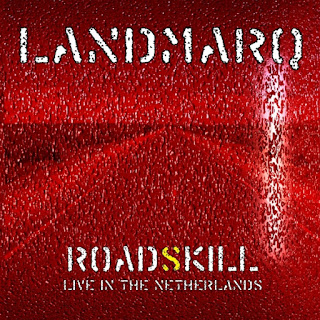 London, UK - With a long reputation as one of the UK’s finest progressive rock bands, Landmarq is enjoying its 25th anniversary year.

This live release is part of the celebration of the band's remarkable career, which has also included a retrospective anthology (Origins), their first vinyl release (Entertaining Angels) and a forthcoming UK and European Tour in the Autumn.

RoadSkill is a Special Edition Live CD and DVD of the show included, showcasing songs from the band's most successful and latest album, Entertaining Angels (hailed by Classic Rock Magazine as "the strongest of their career").

RoadSkill was recorded during the band's last tour in 2013 at De Boerderij in the Netherlands, in front of a packed and enthusiastic audience. It is released on Synergy Records, via Cherry Red Records.

The show features the outstanding and widely celebrated vocals of Tracy Hitchings, award winning keyboard player Mike Varty, Daniel Martin on drums and the two founder members that have been there throughout the last quarter century, Uwe D’Rose (guitars) and Steve Gee (basses). Landmarq has established a solid and enthusiastic following all around the world over the years and have recently been enjoying even greater acclaim.

This live collection of some of Landmarq's best loved songs, captures the power, precision and melody that have made them such firm favourites on the progressive rock stage.

PLUS Interviews with the band and bonus features