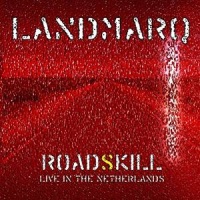 This new release by the band Landmarq, is the live CD/DVD Roadskill recorded at the De Boerderij in the Netherlands as part of the 2013 tour. The release can also be viewed as another part of their 25th anniversary celebrations, along with the previously reviewed Origins, A Landmarq Anthology 1991-2014.

Roadskill, the CD, is an 8 track album with a playing time only a couple of minutes short of the 80 minute maximum that a CD can hold before the quality falls away (77:47). The DVD has a couple of extra tracks in addition to the contents of the CD. The longest track on offer on Roadskill is the 3 part “Calm Before The Storm” at 16:33 minutes and the shortest is “Stormbrewing” at under 2 minutes (1:36). All of the tracks are taken from the 2012 release by the band, Entertaining Angels.

The opening track on the Roadskill CD is “Turbulence” (10:47) and is heralded by a short burst of applause from the crowd ensuring you are aware this is a live recording. The track is quickly into a chunky guitar riff plus “strings” before the voice of Tracy Hitchins soars above the music. The sound quality is phenomenal and the track seems to have a higher intensity than the studio version. There is a terrific keyboard passage in the second half of the track. This is a superb opening track to the album.

Up next is “Personal Universe” (9:14) and is an almost note/pitch perfect replica of the studio recording. The guitar, wielded superbly by Uwe D’rose, gets a chance to shine just after the halfway point. This is another winning track and fades out to be replaced by “Glowing” (11:51). Although the studio version of this track is in two parts separated by another track the live version is a single entity. Once more the clarity of the recording and the skills of the musicians shine through as the live track is almost indistinguishable from the studio version.

The short “Stormbrewing” (1:36) follows with some stunning piano playing from Mike Varty and leads into “Thunderstruck” (14:02). Uwe gets another chance to show his guitar skills as the tracks builds in intensity before Mike’s keyboards join the fray. On this track there is a slight hint that Tracy’s voice sounds slightly forced, but this track is a majestic slice of progressive music.

There is almost a malevolent wave of sound at the outset of “Calm Before The Storm” (16:33) and then it is into chunky guitars and soaring keyboards, supported admirably by the thumping bass and drums of Steve Gee and Daniel Martin. Again, the sound of the live track is probably as near to studio quality as you can imagine, and this is achieved by the band “doing everything just right.” The vocals are handled superbly by Tracy and are always to the fore in this track. The final part of the track, “Into The Abyss,” is a chance for the band to flex their collective muscles and they certainly take the opportunity so to do.

The final track, “Entertaining Angels” (8:07) is the title track of the 2012 album release. Starting with some very enthusiastic audience appreciation, the atmospherics of the track just build with the addition of a simple electric guitar theme which is very relaxing and shows Uwe in his more melodic stance. Slowly the track builds with bass, drums and a guitar riff that announces the arrival of the vocals by Tracy. This is a very good choice of ending track as it is a very gentle paced entity. Some excellent piano, and what sounds like a saxophone, propel the track to its finale. A track which makes you want to go back to the beginning and start again.

This is Landmarq at their live best, with the music being as close to the studio sound as you can get, while still injecting an intensity that is only possible with a live performance. All the members of the band should take a bow (I’ve not viewed the DVD, but maybe they did), as I think I have just heard the best live recording since my all-time favorite, for quality of sound, and that was from 2005, Maximum Minimum by Kraftwerk.

No new music from Landmarq, but Roadskill is an excellent addition to their catalogue and should certainly enhance their, still growing, reputation. Give Roadskill a few listens and smile as you hand over your money to add the album to your collection.