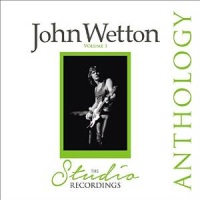 The Studio Recordings Anthology Volume 1 is a look back at the solo career of a man of whom it has been said “has been in more bands than many of us have had hot dinners,” and the man in question is John Wetton. A brief listing of his band involvements certainly gives a flavor of the variety of “jobs” he has had with Mogul Thrash, Family, King Crimson, Roxy Music, Uriah Heep, UK and Asia.

I would normally give an indication as to the band members involved in the review of an album, but as the contents of the release span 31 years, I feel it would be a thankless task, as well as taking up many pages.

The selection of tracks on Anthology Vol 1 come from his “true” solo albums, 3 tracks taken from Caught In The Crossfire (1980), 5 from Battle Lines (1994), 8 from Arkangel (1998), 7 from Sinister (2001), 6 from Rock of Faith (2003) and 3 from Raised in Captivity (2011). Although I suggested that there were 10 solo albums, 3 were collaborations with Geoffrey Downes (Icon, Icon 2 and Icon 3) and the other was a collaboration with Phil Manzanera. I must admit there is one thing that I sit on the fence with anthology albums, and that is whether the chosen tracks should run chronologically or not, as having the chance to see how the artist has evolved through the years I think is a very good thing.

Anthology Vol 1 is a double CD carrying 32 tracks with a total playing time of around 140 minutes with each CD lasting seconds under 70 minutes. The longest, and shortest, tracks on offer are “Take me To The Waterline” on disc 2, and “The Circle Of St Giles” on disc 1, playing for 6:08 minutes and 2:03 minutes respectively.

I will freely admit that John Wetton is not very high on my personal list of listening favorites, although I have been aware of him since being “blown away” by the Family releases back in the 60’s. This release is an excellent introduction to the writing and the music of John Wetton with a fantastic selection of rock ballads which effortlessly move from quiet, soft vocals and music, through some stunning guitar breaks, the addition of excellent orchestration when required, but which is never obtrusive, and at times, some blistering work from John and his myriad of guests.

I would certainly recommend giving The Studio Recordings Anthology Volume 1 a few listens as I was extremely impressed by the material on offer, and I will dip into the music from time to time. My view on the writing and music of John Wetton has rocketed from the position it was, having recently reviewed a couple of his live releases, which were less than impressive.

This is a superb retrospective from a giant in this genre.

Key Tracks: Take Me To The Waterline, The Last Thing On My Mind, Raised In Captivity

The Circle Of St Giles
The Last Thing On My Mind
Hold Me Now
Where Do We Go From Here?
Another Twist of The knife
I’ve Come To Take You Home
I Can’t Lie Anymore
Lost For Words
Battle Lines
Caught In The Crossfire
Arkangel
Right Where I Wanted To Be
Nothing’s Gonna Stand In Our way
Second Best
Woman
Real World

Heart Of Darkness
Say It Ain’t So
Cold Is The Night
You’re Not The Only One
Raised in Captivity
Steffi’s Ring
Walking On Air
Take Me To The Waterline
Silently
Battle Lines (Acoustic)
I Lay Down
Rock Of Faith
Who Will Light A Candle?
Jim “The Ancient One” Lawson-Sr. Reviewer Prog Rock Music Talk
August 25, 2015
Review Provided By Prog Rock Music Talk