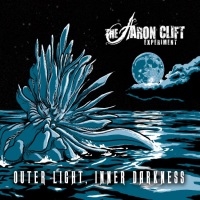 The band is a 4 piece, initially formed in 2012 by Aaron Clift (vocals, keyboards) along with Jim Ragland (guitars), Joe Green (bass) and Joe Resnick (drums), but there have been several changes since the release of Lonely Hills. Jim Ragland was first to leave, being replaced by Danny Brymer, who in turn left in 2013 to be replaced by the current guitarist, Eric Gutierrez. More movement saw the bass player, Joe Green leave and in his stead arrived Devin North earlier this year.

Outer Light Inner Darkness is a 10 track album, if you include the 2 bonus tracks, running for just over 63 minutes. The shortest track is ”Your Arms Hold Them to The Dark (acoustic version)” at 3:40 minutes and the 3 part suite, “Moonscape” incorporating “The Frontline,” “Fool’s Mate” and “Outer Light Inner Darkness” at 12:04 minutes is the longest.

Opening proceedings for Outer Light Inner Darkness is the track, “Kissed By The Sun” (7:40) which certainly grabs the listener by the ears with both guitar, then violin, demanding attention. The song is then underpinned by the bass and drums of Devin and Joe, prior to the suave, sophisticated vocals of Aaron putting in an appearance. Although going through the initial fiery intro sequence, then coming down a few rungs, this track continues to demand the attention of the listener. Moving from bass to piano, to guitar led passages, this is a classy opening track to the album. The guitar of Eric has a harder edge than appeared on the debut release.

“Fragments of Sleep” (4:37) is a slightly more up-tempo style with a repetitive piano motif and a stunningly simple but powerful combination of the drum and bass engine-house. Aaron’s voice is always clear above the music and is the one consistent anchor in the proceedings. This is a more thoughtful track with a style change into the second half with strings/violin and great harmonizing/double-tracked vocals. A short a cappella section takes the track out and into the somber, almost sinister, piano intro of the next track, “Your Arms Hold Them To The Dark” (4:20). This has a slow, almost ponderous pace with the guitar riff crashing through then allowing more vocals, but the feeling of malevolence is always seemingly lurking just under the surface. Track 4 is a very different track to earlier material which highlights the confidence and maturity that the band has gained.

Next up is “Aiode, Goddess of Song” (5:57) which harks back to the almost abrasive style start to the opening track which then falls away as the vocals enter. From that point, the track moves effortlessly from the more upbeat driving passages to the softer melodic sections.

“The Last Oasis” (8:35) has a beautiful piano start which is then joined by a simple almost understated bass theme and a melancholic violin passage. This seems very classical in structure as the band slowly blends into the ethereal soundscape around the 3 minute mark. A tempo change speeds the track up, but it retains its classical styled appeal and seems to be instrumental with Eric’s guitar getting a long melodic workout. Well past the halfway point, the vocals, almost unexpectedly, make an appearance. Aaron’s crystal clear vocals add to the feeling of majesty, just before the rhythm engine bumps proceedings up a notch or two and drives this excellent track towards its finale.

“Moonscape” (12:05) is a simply superb track starting with just the voice of Aaron, military drumming and underpinned with a repeated keyboard motif. War sounds off in the distance paint a stunning aural landscape held by the simple guitar, keyboards and voice. The guitar then backs the vocal with some strummed chords before the keyboard motif reappears. Eric gets a chance to fire off a subtle guitar passage and you can almost sense that he was trying very hard not to allow the guitar to simply fly away. There is a meandering feel at times to this extended track, but that isn’t to say the listener is allowed to switch off. The passage of repeating the album title is almost trance like and demands attention. The guitar again has a long subdued passage with Aaron vocalizing at points rather than singing. This is a majestic 12+ minutes which is worth a 5 star review all on its own.

“Moonscape” moves seamlessly into the next track, “Bathed In Moonlight” (7:27) and this is simply Aaron’s voice, backed by excellent keyboard, effortless drumming, subtle bass and simple, but wonderful, guitar. Almost 7.5 minutes of heavenly, serene music to admire.

The last 2 tracks are classed as bonus tracks, one is an acoustic version of “Your Arms Hold Them To The Dark” (3:39) and the single version of the opening track, “Kissed By The Sun” (3:59)

Outer Light Inner Darkness is one of those albums that even on first hearing, you are aware that you are listening to something special. Repeated plays of this album simply make the satisfied smile wider and wider. The debut album was an amazing first release, but this release sees the band soar.

This album has certainly made me stop in my tracks, as my previous review (Kinetic Element) was my choice of release of the year, but Outer Light Inner Darkness, has now equaled that album. The Ancient One is extremely lucky to have reviewed 2 cracking albums one after the other.

My advice is to go out and buy Outer Light Inner Darkness as soon as possible and add one of the best albums of 2015 to your collection.