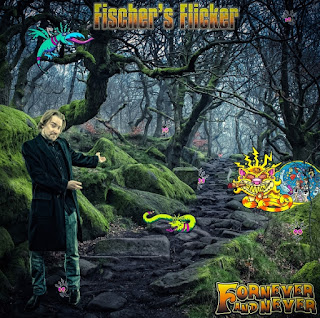 Chicago, IL - From the first moment of “Black Mariah,” the lead-off track to the sophomore LP from Fischer's Flicker titled “Fornever and Never”, it's clear that bandleader Scott Fischer is up to something interesting. The grandiose piano, the nimble guitars, the pounding drums - it sounds a bit like a throwback to 70's pop excess. Once the vocals come in, Fischer's decidedly modern pop sensibilities pull everything together in an unexpected way.

If “Black Mariah” is an impressive opening statement, the second track, “Dead To Me”, is the unmistakable sound of a band winning you over. The track's syncopated bounce and Fischer's languid drawl show a genuine love for the piano men of yore, simultaneously creating something as familiar as it is fresh.  “Halo of Flies” opens with an eerie, dissonant guitar riff followed by downright pummeling guitars. The Alice Cooper-penned rocker blooms with droning bass, psychedelic guitar effects and Fischer's voice taking on a sneer that is undeniably faithful to the source.

“Mrs. Rogers (& the Land of Make-Believe)” is an unnerving whirling dervish with Middle Eastern roots, “Dancin' Girl” is a smooth R&B jam, complete with a sultry guitar solo, and the title track shows off pianistic prowess before exploding into a Bat Out Of Hell-styled multi-movement epic.

But somehow - despite the completion of such an ambitious album, one showing a depth and range of musicality most artists will never achieve - Fischer still isn't satisfied. “We're actually already halfway complete with the album that will come out next, and we're aiming to have that one released within 12 months,” he said.

Here's what the press have raved about Fischer's Flicker:

“In a day and age of minimalist attitudes, Fischer strives to balance the music with musical theatrics and avant-garde mindset hearkening back to the prog rock giants of the '70s” - AntiMusic.com

“This is quite an entertaining and strong release” - Music Street Journal

“Sounds like a contemporary version of The Band, with a bit of Leon Russell and maybe Wilco thrown in. Scott Fischer has an endearingly Rick Danko styled voice, and a strong sense of melody.” - Musoscribe

Scott Fischer's brain is like a vast musical amusement park and he wants to take us all on a thrilling ride. Fischer's Flicker is the latest brainchild of Fischer, a Chicago native, and marks the next step in a musical evolution that began over 15 years ago. While Fischer's Flicker’s debut album, “Katmandon't” is more mature sounding than Fischer's previous efforts, it stays true to the core of Fischer's music with big melodies and ambitious composition.  Fischer’s earlier projects include Deja Voo Doo and it’s ambitious release “Carpe P.M.: Honor Comes Only After Humility”.  Notably, Deja Voo Doo performed live at Zappening 2000 (a tribute festival to Frank Zappa).   After several years of writing and performing, Deja Voo Doo evolved into Powderhouse and then into Babaganoo. After a hiatus, during which Fischer honed his skills while touring on the corporate/cover band circuit which included a stint in The Virgin Islands and large profile shows at Summerfest and Vince Lombardi Awards, Fischer returned to his passion for original composition and formed Fischer's Flicker. The band is comprised of Deja Voo Doo alumni including Mario Licciardi and Tim Kubiak on guitar, Turan Yon on bass and Tim Gavin on drums.

Scott explains, “I write about what I’m going through, and I’ve experienced a heck of a lot between 'Katmandon't' and 'Fornever and Never'.  The material, overall, is more challenging and I feel that, while it’s not a concept album, there is a definite journey involved.”

Listen to 4 tracks streaming from the album here: