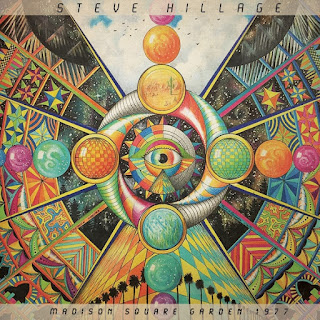 London, UK - Steve Hillage is one of the most idiosyncratic and instantly recognisable guitarists in the world. Associated with the Canterbury scene, he has worked in experimental domains since the late 1960s. Besides his critically acclaimed solo recordings, along with prog legends Gong, Steve has been a member of the ensembles Khan and System 7. And now, much to the excitement of Steve Hillage fans worldwide, Cleopatra Records will be releasing a vintage concert recording from 1977 of his band in concert at Madison Square Garden in NYC!

Says Steve, “This was a great performance from another fine period of my band in the late '70s. This was my first tour of the US – Gong never played there while I was in the band in the seventies. It wasn't my first visit to the US though – my first visit was in 1976 when I went to record 'L' at Todd Rundgren's studio, near Woodstock, New York. Madison Square Garden in New York is an iconic major venue, so it was a fantastic honor to play there! We were playing to audiences who mostly didn’t know our music too well, so we just let rip and went for it. The band was really firing!!!”

“Todd Rundgren came to the Madison Square Garden show,” Hillage remembers, “and I'm pretty sure he joined our sound engineer at the mixing desk and added some extra Harmonizer drum effects to 'It's All Too Much'. It certainly sounds like that on the recording! I was waiting for a good moment to release this US gig recording in the US on an American label. Cleopatra, with whom I’ve had a long relationship, asked me if I had any good available archive material and it immediately struck me that this moment had arrived!”

Steve Hillage first came to prominence as a member of the multi-national rock band Gong. Steve appeared on successful albums such as 'Angels Egg', 'You' and his final album with the band 'Shamal'. Steve recorded his first solo album in 1975 entitled 'Fish Rising'. This album was recorded whilst still a member of Gong. Shortly after however, Steve and his partner Miquette Giraudy left Gong embarking on a career that continues to this day under the name System 7.

In 1976 Steve recorded the album 'L', which was produced by Todd Rundgren. The album was a huge success and Steve subsequently formed the first Steve Hillage Band, which included former Jethro Tull drummer Clive Bunker and future Camel bassist Colin Bass. The band made its live debut at the Hyde Park concert staged by Queen in September 1976. From 1976 to 1979, Steve Hillage released several critically acclaimed albums and toured the world.

Steve Hillage's “Live In Madison Square Garden 1977” is available on CD in a mini-LP sleeve and a special limited edition opaque orange vinyl pressing with full color insert and sleeve!