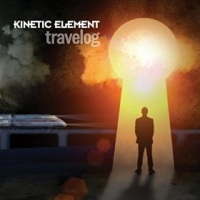 This is another first for The Ancient One, having not come across the band, Kinetic Element, before the second release from the band, Travelog, landed on my review desk. This new release follows on from the bands’ debut album release, Powered By Light, issued in 2009.

Kinetic Element originally came into being as the creative vehicle for Mike Visaggio, who had just completed his debut solo album and was looking to recruit musicians to perform live. Mike and the three additional musicians worked so well together that they became a band project, and Kinetic Element, the band, entered the realms of progressive music. There was one other release prior to the full album debut, and that was the EP, The Powered By Light Suite in 2008.

The band consisted of the following members and guests when Travelog was recorded. The 4 members of the band were Mike Visaggio (keyboards), Todd Russell (guitars), Mark Tupko (bass) and Michael Murray (drums), with guests Dimetrius LaFavors, Mike Florio and Michelle Loose Schrotz providing vocals on the tracks. The band had only shown one change in the personnel from the debut, although other changes happened between times, and that was Mark Tupko replacing Tony D’Amato on bass.

Travelog is a 5 track album with a running time of around 70 minutes, meaning that all tracks are fairly long, with the shortest, and title track, still nudging the 10 minute mark (9:51) and the opening track to the album, “War Song” stretching on past the 20 minute mark (20:32).

“War Song” (20:32), the opening track on Travelog is a majestic piece of work. The track starts with some atmospheric synths and percussion before the drums and bass all join in and the music simply builds, layer by layer, providing a superb introduction passage. Around the 2 minute mark, the guitar soars above all and you realize, this early into the album, that you are listening to an amazing piece of music. The constant layering and variation of the lead instrument just draws you deeper and deeper into the music. The repetition of little themes penetrates into your mind so easily. Around 4:30 minutes, there is a sudden change to military style snare strumming and an almost Celtic feel to the acoustic guitar. The vocals enter and fit the music like a glove. Some more stunningly simple guitar backed by the unobtrusive bass/drums link to the next vocal section. Just prior to the 8 minute mark there is an almost medieval style theme with guitar and keyboards to the fore. The flow of the track is effortless as it moves from passage to passage. All of the musicians shine brightly with majestic keyboards from Mike, cutting edge guitar from Todd, and a beautifully solid power machine of drums and bass by Michael and Mark respectively. The constant tempo and mood changes make this track so mesmerizing that you just want to listen to it over and over, before it eventually crosses your mind that there are another 4 tracks still to go. This is a stunning start to Travelog.

The title track is next up, “Travelog” (9:51) and shows off the superb acoustic guitar skills of Todd. Themes appear, fade and reappear again prior to the 2 minute point. I will admit that I did find the vocals a little disappointing compared to “War Song,” as they didn’t seem to gel as well. This is beautiful music by the band, but just fails to hit the heights of the opening track. A long pastoral style sequence takes the track out on a high.

“Into The Lair” (10:08) is similar in style to Yes in approach with stunning guitar and majestic keyboards, a la Steve Howe and The Caped Crusader himself (Rick Wakeman) and the listener is back at the dizzying heights of the opening track.

Next up is the track, “Her” (11:19) with a wonderful “waterfall” piano theme, conjuring up the best moments of Tony Banks (Genesis) as it then evolves into piano and keyboard passages. A sudden change to a jangled guitar chord leads the track into the vocals which have subtle guitar themes running behind them. The song builds and just on the 8 minute mark there is an absolutely stunning keyboard section which slowly heralds the vocals and chunky guitar return.

The final track, “Vision of a New Dawn” (18:26) has a terrific piano intro until a superb jazz styled guitar takes up the reins and then starts to soar. A drop in the sound leads into a very atmospheric acoustic guitar theme and then more of Mike’s majestic keyboards assume the musical mantle. Gentle piano leads into the vocals, which are suitably emotional and another excellent guitar melody backs the vocal. Unobtrusive they may be for most of the time, but the superb playing of Michael and Mark, the rhythm section, is always exceptional. Just at the 10 minute mark, there is a tempo and style change with an instrumental passage, led by the keyboards, which sweeps the track along with the band in excellent form. Moving to the 15 minute point and the strummed acoustic guitar puts in an appearance, with a melody being whistled, yes I did say whistled, which ushers in the vocals as the last track enters its final furlong and the song meanders towards its goodbye.

I had not heard of Kinetic Element before this album, but Travelog is the type of surprise that simply blows the listener away. There have been many releases in 2015 that have, in my opinion, been excellent, but I can safely say that Travelog is my No. 1 album of 2015 at this point.

All fans of progressive music need to hear this album and I would be very surprised if Travelog did not find its way onto many thousands of home CD shelves. Bearing in mind I was a little dubious about the vocals on the title track, I would like to thank Mike, Todd, Mark and Michael, together with the 3 guest vocalists, for producing such a superb album.

The Ancient One has already featured “War Song” on the radio show (Progzilla Radio) and my simple advice to everyone is to just go out and buy your copy of Travelog as soon as is humanly possible.

Key Tracks: War Song, Into The Lair, Vision of a New Daw

Tracks:
War Song
Travelog
Into The Lair
Her
Vision Of A New Dawn