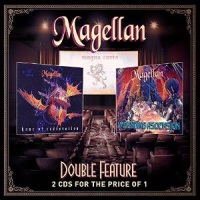 I initially thought that Magellan was another example of the “new” bands that The Ancient One had simply missed out on, but on doing a little digging, I found that they were formed 30 years ago in 1985. The album that had arrived, Double Feature, is indeed as the title states, being the packaging together of the first two releases by the band, Hour of Restoration (1991) and Impending Ascension (1993).

Magellan has released 7 studio albums since the debut, Hour of Restoration in 1991, up to Innocent God which was the last full album release in 2007. Since that point, the band has been fairly quiet with the release of some singles, including cover versions of Kansas (“Dust In The Wind”) and Chicago (“25 or 6 to 4”).

The members of the band at the time of the debut recording were the brothers Gardner, Trent and Wayne, playing keyboards and guitar respectively, with Trent also supplying lead vocals and Wayne supporting with backing vocals, as well as Hal Stringfellow Imbrie, on bass and backing vocals, and one I suspect might be an alias, Magellan on drums. There was a slight change of personnel on the recording of album No 2, Impending Ascension, with the Gardner brothers and Hal still present, but the drum stool had Magellan and Doane Perry sharing and also the presence of a female vocalist, Hope Harris, appearing on one track.

A nod to the style of Magellan would probably be to imagine a band with the “over the top” style of Yes, the gentler touch of Genesis, power a la any power trio and the slightly heavier side of bands such as Kansas. There is a distinct leaning towards keyboard led tracks with the guitar certainly not used much as a lead instrument. I should also point out, as an aside, that I do like the band, Yes, very much, but I do think they were a little “pompous” at times, such as on Tales From Topographic Oceans.

The Double Feature release has a total playing time of around 95 minutes, with disc 1 (Hour of Restoration), running for around 44 minutes and disc 2 (Impending Ascension), slightly longer at around 50 minutes.  The longest track on offer is the opening track on disc 1, “Magna Carta” with a playing time of 15:09 minutes and the shortest track, also on disc 1 and the final track, “Turning Point” lasts just under a minute and a half (1:26).

The opening track on this new release by Magellan, is “Magna Carta” (15:09), and mention should be made that the album is a concept album basically dealing with a chunk of English history, hence this opening title, which coincidentally also happens to be the original record label the band released on. This is the longest track across the 2 discs and after many listens, the band do seem much more at ease allowing the longer tracks to build and evolve. “Magna Carta” highlights the excellent keyboard work of Trent Gardner, and the intro to the track just builds and builds prior to a quirky time signature change, and this is where my doubts start to creep in. Across this track there are some sublime keyboard based passages, but there are some time signature changes which verge on the discordant as the whole track abruptly does an about turn. What also becomes much clearer is that Magellan, the alias of the drummer, is the name given to their drum machine, and there are examples of the metronomic drumming style, of which I am not a fan. This is a real mixture of an opening track, but there were enough positives to make me look forward to the rest of the album.

The next couple of tracks, “Winner” (2:10) and “Friends of America” (3:34) are at best pleasant, but not outstanding nor memorable. ”Union Jack” (9:23) is a different kettle of fish, as the length again allows the track to build and flow. There are neat bits of narration, excellent keyboard work and the voice is more than adequate, although I felt that some of the lyrical content didn’t scan very well and seemed to be too forced.

Tracks 5 through 8, “Another Burning” (5:12), “Just One Bridge” (2:18), “Breaking These Circles” (5:25) and “Turning Point” (1:26) are similar to the earlier shorter tracks by being a little interesting, but their lengths never allow the tracks to build on any potential shown.

Disc 2 commences with “Estadium Nacional” (11:38) and shows the bands’ maturity and confidence with a much harder hitting sound, but also a much better flowing musical thread. There seems to be much more depth to the music which carries the listener along, sharing the superb keyboards, that are a Magellan trademark, and the vocals seem to suit the music better. The time signature changes work well and this is an excellent opening track.

A piano passage and a very different style for the band, opens “Waterfront Wierdos” (11:25), before the reassuring keyboards enter. Swinging from gentle piano sections to heavier keyboard motifs, this track is another very good slice of progressive music.

The shorter songs on disc 2 all seem to have more happening within them and generally seem to shed the “filler” description from the disc 1 examples. The final track, “Storms and Mutiny” (12:13) isn’t quite as successful as the other longer examples although the long keyboard/ symphonic ending was both terrific, and, unexpected.

Magellan have taken the best bits from the debut, Hour of Restoration and evolved the sound for the second album, Impending Ascension, and although nothing earth-shattering, there is enough on this release to get prog fans interested. Give Double Feature a few listens and see what you think.