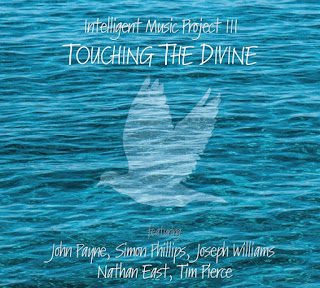 Bulgaria - TOUCHING THE DIVINE is the third studio album from Intelligent Music Project and the second all-star line-up, creating a remarkable infusion by its author and producer's musically erudite and unconventional style, and the full creative input of the legendary musicians. The production features session aces Simon Phillips (drums and percussion), Nathan East (bass) & Tim Pierce (guitars), and the remarkable voices of John Payne (ex-Asia) and Toto`s Joseph Williams, who bring their own flavor to all 14 equally outstanding pieces in the album.

Intelligent Music Project III is showcasing the chemistry and versatile style that went into IMP II - rich and layered, guitar-centric, melodic-progressive sound. Catchy tunes, and dynamic riffs melt flawlessly with Payne's and Williams’ trademark vocals while the immaculate Phillips – Pierce – East stamp their blueprint on the record all the way through.

The band's overall musicianship blends impressively with the complexity of musical arrangements, including unforgettable symphonic expansions. Matching the classic rock energy and instrumental charge with his lyrical patterns, rapt and diverse music theme development is the signature style that propels this all-star project of Milen Vrabevski, author and producer of TOUCHING THE DIVINE.

Watch THE MAKING (EPK of Touching the Divine) here:

From the soul retriever “We Can” sung by John, through Joe's passion “Life” and the duet “Stay Up” (John & Joe) to the key tracks “Simply Feels Good” (featuring lead and backing vocals by John Payne, Joseph Williams and Carl Sentence, recently appointed as Nazareth's lead singer) and “Mind Projection” – Intelligent Music Project III marks its producer's determination to make one solid addition to the AOR classics of all times.

Says Simon Phillips, “It's really interesting to do a second project with Milen. In this new project 'Touching the Divine', musically the composition has developed, it's developed from the first record... and that's good to see.”

Says Tim Pierce, “This project is great, because it's very, very challenging and musical, in a way like Queen is musical... and it's got all of these layers and colors. Musically it's very fun, because it travels a lot of different places.”

Says Joseph Williams, “It's wonderful to explore working with Milen. The project has a wonderful message, accompanied with some beautiful music and some great rock 'n' roll – the musicians in this project are top 'noch.”

Says Nathan East, “This project is very special to me, because of the nature of the message of the project. I was very inspired and happy with the idea, because the message has value and meaning and I am about that. The word 'inspirational' is what I use to describe this project.”

Says Carl Sentence “There is a lot of music and a sense of depth in Milen's songs. They are not ordinary. They are very beautiful… and the way these songs are composed is very, very good.”

Says John Payne, “It's incredible opportunity to work with such great people – Nathan East, Tim Pierce… Wonderful songs – my favorite so far is 'Mind Projection', but there are a lot of great songs, a lot of great melodies and some great playing. You've got some world class players – Simon, Tim, Nathan East…and Joseph Williams singin', I mean – he is amazing!”

Says Milen Vrabevski, “This is a super band, which every producer would be happy to work with, and it gave a very good finish to our Intelligent Music Project, in this case – number III. I was enormously fortunate to be the author and producer of the whole project. The idea we want to share with the audience through this album is simple – we must find the Divine within ourselves in order to become the successful individual we want to be. We try to show how to do that.”