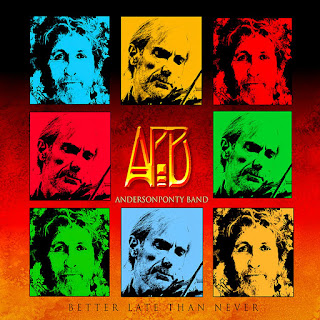 Jon also appeared on KSWD-FM 100.3 The Sound's popular morning show Mark in The Morning with Mark Thompson (live), and nationally syndicated program Uncle Joe's Garage will Joe Benson (air date to be announced). Jon was also interviewed on the show “Off The Record”, which will air the weekend of October 24/25th. It will also air on KSWD-FM 100.3 The Sound &amp; stream live at www.thesoundla.com on Sunday 10/25 at 8pm PST. Jon ended his visit at The Sound with an interview on the show “My Turn” (air date to be announced)

After which, Jon appeared on KLOS-FM's national radio show The Side Show Classic with Nikki Sixx which aired on October 3 and 4. He played music from the AndersonPonty Band's “Better Late Than Never,” as well as his favorite songs from the YES catalogue. Jon also share stories from his legendary music career, including his experience seeing the Beatles perform in 1963, hanging out with Jimi Hendrix, and his favorite Neil Young concert. Visit www.SixxSense.com for additional information, or to find a local radio station and listen online. Fans can also tune into the Sixx Sense channel on iHeartRadio, iHeartMedia's free all-in-one streaming music and live radio service.

To conclude the radio promo tour Jon appeared on the Jim Ladd show on SiriusXM, where he played tracks from the new AndersonPonty Band CD as well as discussed his fascinating and incredible history in music! http://www.siriusxm.com/deeptracks

The AndersonPonty Band, featuring music icons Jon Anderson and Jean Luc Ponty, new CD/DVD titled “Better Late Than Never” hit the streets on September 25th! It features outstanding performances by the band from September 2014 at the Wheeler Opera House in Aspen, Colorado, as well as some innovative production.

The AndersonPonty Band's “Better Late Than Never” has been receiving rave reviews worldwide!

“After all these years, Jon Anderson is still out there on a quest to create new music and move ever forward in new directions...Give it a listen – Anderson and Ponty are moving forward, not looking back!” - The Afterword, UK

“Much-anticipated collaboration reinvigorates its two legends...The optimistic (Anderson) voice and Ponty's elegantly emotional violin is a fusion made just south of heaven...This album is made with love, which shines through.” - PROG magazine, UK

“The Yes compositions are given a fusion treatment, and elevates the songs.” - Progarchives, USA

“It is a perfect confluence of two wonderful talents, that is both risky and highly rewarding...Prog fans, spread the word about Better Late Than Never. brings together the golden age of progressive music and the modern era. This album belongs in your library.” - Classic Rock Revisited, USA

“That I found this project to be a wonderful way of introducing themselves as a group. The older music presented a foundation on which to build a new structure. Enough new material added to make it feel like a new experience. One that you'll want to repeat again and again.” - Classic Rock Radio EU, USA/UK

“...an album that rewards with close listening and one that gets better the more you invest into it.” - Vintage Rock, USA

“This is definitely one that will make my best of 2015 list. It’s one of the best progressive rock releases of the year.” - Music Street Journal, USA