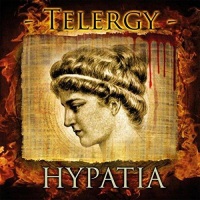 Hypatia is release number 3 for the band, Telergy, the name for the creative vehicle of composer and multi-instrumentalist, Robert McClung. I had not heard of this band prior to The Legend Of Goody Cole arriving on my desk for review in 2013. That release followed on from the debut by Robert, The Exodus, in 2011. All 3 albums are concept releases, with each telling the story of an important historical event. The new release, Hypatia, is based on the life of Hypatia of Alexandria, who was a great mathematician, astronomer, philosopher and teacher who met a tragic death in 415 AD.

Robert recruits musicians to help out in his recordings and he turned his attention to progressive music in 2009 after 2 decades of playing in a variety of genres.

Hypatia is a 17 track album which lasts just over 63 minutes. Nine of the tracks are narrative scene setters which link the main tracks and carry the concept through the album. They tend to be very short and vary in length from just under, to just over, a minute. The longest track on offer is track 4, “Philosopher” with a playing time of 11:44 minutes and the shortest of the main tracks is track 12, “Scapegoat” with a running time of just under 3 minutes. (2:54)
The first main track is track 2, “Astronomer” (7:15) and follows the directional narration of “Scene 1” (0:38). The initial building up of gentle sounds, slowly increasing in intensity, is suddenly blown away by the thundering entry of “the band” at just over a minute. Chunky guitar chords and stunning keyboards/synths run riot and a superb lead guitar weaves a melody over the solid background. Around the 2:30 minute mark, the lead instrument morphs into a stunningly emotive violin with a particularly memorable theme. A little muffled atmospherics carries the track into a very upbeat flute passage which reintroduces a level of chunkiness whilst maintaining an almost Eastern feel. Once again the guitar gets a chance to show off a little as the track starts to drive along and then settle back into the chunky feel of the starting point. This track works very well and bodes well for the album, remembering that it is a concept album and is mainly instrumental in nature.

A second short narrated scene setter, “Scene 2” (0:37) leads the listener into the longest track on offer, but only by seconds, “Philosopher”.(11:44) This time the band is piano based and has a magnificent arrangement of choral voices set against majestic strings. The slow “burn” of the choir fades to usher in some subtle synths which are joined by drums and bass to form a driving track with a terrific feel. The choir splits and leaves the male and female voices at times harmonizing and at others juxtaposing for the lead. The violin sweeps along with an excellent theme as the track approaches the halfway point before giving the piano a chance to lead the way. A change to a slower, almost melancholy, theme backed by some excellent strings lulls the listener into a false sense of security before the band “up the stakes” with a very metal section leading into a frenetic synth section which morphs into an electric guitar theme before returning to the synth. The track ends with a gentle orchestral fade out.

One of the best tracks on offer is track 14, “Murder” (9:30) which aurally illustrates the brutal ending which befell Hypatia, when a small riot caused by rivals of her ideas, climaxed with Hypatia being attacked and killed by having pieces of her body cut off. The track conjures up the atmosphere of the unfolding brutal killing by constantly building in intensity, together with “shouting from the mob” in the background. The choir adds to the mesmeric soundscape being produced and there is a distinct slant to a metal style in the driving music. The slow section coinciding with the realization of the actions of the mob is stunning, bookended as it is by the metal style of the rest of the track.

Telergy has successfully produced another concept album which works very well, considering that the “storyline” for the most part is only being suggested by the instrumental nature of the music and the details of the story are being formulated inside the head of the listener. The music echoes the developing concept so well and shows that instrumental music that is well thought out, properly produced and played with passion will indeed “speak” to the listener.
Hypatia is not an “immediate” album and indeed I had listened several times before it suddenly all just worked and I found the album eye-opening (or should that be ear-opening?). My advice would be to give the album a chance, it does require multiple listens, but hopefully you will then appreciate just over an hour of excellent instrumental progressive music and the concept held within.