Concert Review: The Winery Dogs In Concert At The Ridgefield Theater

It has been two years since I have had the opportunity to see The Winery Dogs in concert. The band consists of Mike Portnoy (drums, vocals), Billy Sheehan (bass, vocals) and Richie Kotzen (lead vocals, guitar and keyboards). They are a true super group and they just released their second studio album Hot Streak.

To kick off their Double Down World Tour 2015/2016 they chose the charming town of Ridgefield, Connecticut. The venue was the Ridgefield Playhouse, a 501(c)(3) nonprofit performing arts center with a capacity of 500. As soon as I got there it was a reminder that I was there once before in 2005 to cover Mountain and Rick Derringer. 10 years has past so quickly! This time I am going to keep an eye on who is playing there so I can go back. 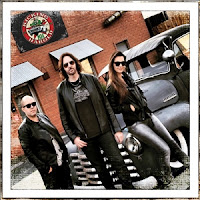 Before the stars of the evening took the stage a three piece called Kicking Harold warmed up the crowd. The band is Michael Odabashian (drums/vocals), Tim David Kelly (vocals, guitar) and Julia Lage (bass, vocals). They are hard edged and heavy with influences of metal and punk in their presentation. I hear influences like The Ramones, Black Sabbath and others. They did a few covers like “Born To Be Wild” and “Working Man” and their original material stood up well. I never place any expectations for an opening act but they were one of the better bands I have seen in that slot.


The Winery Dogs set started off with one of their new tracks “Oblivion.” The packed house were treated to all the new songs as well as cuts from the first album which it made it a very diverse set.  This is a band that is hard to categorize, they cover rock, pop, progressive, blues, everything it seems. Ritchie Kotzen is the multi-talented centerpiece of the band. This of course takes nothing from Portnoy and Sheehan who both are incredibly talented musicians. I have seen Portnoy play with Dream Theater 8 times and now with one of his newer bands twice. Portnoy amazes me; he is part of many bands and has helped so many other bands get some much needed exposure. His importance in the music community goes beyond words at this point.

Kotzen just oozes with soul and emotion when he plays and sings and Sheehan and Portnoy are perpetual motion machines that are a joy to watch.  Kotzen is equally talented with his vocal delivery, guitar and keyboards. He is also the consummate showman pulling the crowd in like a large magnet. We witnessed this when he took the stage by himself and sang “Fire” with his acoustic guitar. I also found his apparel interesting; he looked as though he was ready to take the stage with Blackmore’s Night (another one of my favorite performers).

So as this super group made their way through their set many things were going on all at once. With so much talent on one stage it’s like spontaneous combustion and the chemistry these three men have just sparkle and shines all night long.

One my favorites is “Time Machine” from their first album. It provides a showcase for everyone’s talent in the band. They really know how to stretch it out on this one out and rock the house. What I continue to find a wonder is how Kotzen plays his guitars without a pick. Not many professionals do it that way particularly with an electric and in their style of music.


If you happen to be looking for a concert to attend that features some of the best musicians in the world on the same stage I would encourage you to go see The Winery Dogs. I guarantee you will walk away stunned at how good they are. They are not main stream so they are still a bit under the wire but just watch as their following continues to grow. Get out there and support live music, buy their CDs and swag at the merchandise table. Doing those things will keep the music alive and make it worthwhile for these folks to continue to entertain us.

Set List:
Oblivion
Captain Love
We are one
How long
Time Machine
Empire
Fire
Think it Over
The Other Side
Not Hopeless
Ghost town
Hot Streak
I'm No Angel
Desire