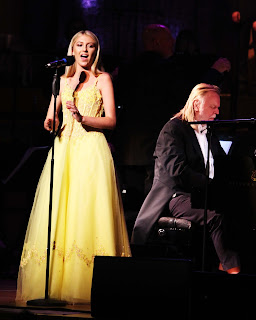 London, UK - “Welcome A Star” is the first single from 15-year-old soprano Emmie Beckitt, in collaboration with classically trained pianist, composer and TV presenter, Rick Wakeman. Rick first met Emmie, who has been singing classical repertoire since the age of ten, at a fundraiser for Kids 'n' Cancer – and was so impressed by her crystal clear voice and effortless range that he decided her to record a song from his oratorio The New Gospels, which tells the real story of Christmas.

The result is “Welcome A Star”, a beautifully melodic Christmas song, released by Hope Records via Nova Distribution, on Friday 4 December. “Welcome A Star” was recorded by Emmie with the English Chamber Choir and the Orion Orchestra, and features Rick on keyboards.

Currently studying for her Grade 8 exam in singing, Emmie Beckitt takes part in the Senior School Chamber Choir at St Augustines, Scarborough, North Yorkshire and is also a member of her school orchestra and jazz band, as she plays tenor saxophone, violin and piano. When aged only 13, she supported Katherine Jenkins in concert and a year later, appeared at Roy Wood's sell-out show at the Birmingham Symphony Hall, where she received a standing ovation. She recently sang “The Hymn”, composed by Sir Tim Rice and Rick Wakeman, with an orchestra and choir, at The Sage Gateshead, as part of the Tim Rice Concert Series.

A Fellow of the Royal College of Music, Professor of the London College of Music, former YES keyboard player, Watchdog presenter and renowned Grumpy Old Man, classically trained pianist Rick Wakeman began his career as a much-sought-after session musician in the late Sixties, playing on more than 2,000 records by a wide variety of artists, including Cat Stevens, David Bowie, Marc Bolan and Black Sabbath. In the early Seventies, he found fame in his own right as a member of first Strawbs and then YES. As a solo artist and with YES, he has sold more than 50,000,000 albums. He has written a number of film scores and has become a TV regular, appearing on shows like Never Mind The Buzzcocks and Countdown and of course, Grumpy Old Men and Watchdog. He still finds time to perform numerous concerts around the world every year, ranging from his extremely popular one-man show to extravaganzas that feature symphony orchestras and choirs.

Both Emmie and Rick are patrons of the Chesterfield charity Kids'n' Cancer and a percentage of the profits from the sale of Welcome A Star will be donated to that organisation.

Welcome a Star is released on Friday 4 December, and is available in CD and digital single formats:
https://itunes.apple.com/gb/album/welcome-a-star-single/id1052288010
http://www.amazon.co.uk/Welcome-Star-Emmie-Beckitt-Wakeman/dp/B01762UWC0/ref=sr_1_1?s=dmusic&ie=UTF8&qid=1447065657&sr=1-1-mp3-albums-bar-strip-0&keywords=emmie+beckitt