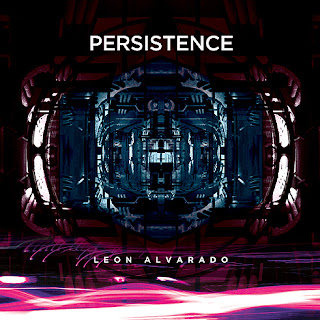 “A short adventure of sight and sound”

Houston, TX - On the heels of his critically acclaimed album from 2014, prog instrumentalist Leon Alvarado is releasing a new short film and accompanying soundtrack single titled “Persistence” on December 15, 2015. The film is being described as “a short adventure of sight and sound”. The soundtrack single features King Crimson's Trey Gunn, and was mastered by Andy Jackson who co-produced the latest Pink Floyd album.

Says Leon, “The film takes its own point of view at the chaotic pace that's involved in our every-day life as a global society. The point of the film is to look at the mostly man-made chaos and contrast it with nature's own process of going through time. In order to make the point, I changed the context of events so that the viewer can appreciate them from a different perspective. The music is an evolution from my last CD which was titled '2014 Music From An Expanded Universe' and wasn't recorded to fit the film but the other way around. I have always felt that my music is very cinematic in scope and making a film out of one of the pieces would be a natural move on my part.

“The CD itself has only two pieces of music on it. Originally I intended to release the music as a download-only single and the movie on my newly created Vimeo and YouTube channels. As I got deeper into the project I decided to get some CDs made for the collectivists out there. I suppose I could have waited until I had more music finished and release a full album or an EP but the reality is that I am also working on other projects that are quite different from this one and those projects will require a great deal of my attention. When I recorded 2014 with Trey Gunn, there were some tracks from those sessions that I felt could serve as a base for more music. I often wonder about my music, what if I do this to this piece or, what if I would have taken a different approach to the beginning of this piece? Those sorts of questions often lead me to either create new pieces or re-work older pieces. In this case, it led me to create the piece titled 'Persistence. For the CD itself I decided to add one more piece of music. I decided on 'Red Like Blood' which is one of the pieces that was released with the 2014 CD. It also happens to be one of my personal favorite pieces. In this way, the CD will have close to 13 minutes of music but more importantly, it will have two of the pieces that I am most proud of. The sound still very much influenced by King Crimson but still very original in its own right.”

“Persistence” was a track that derived from an idea Leon had during the 2014 sessions. It was a track where he and Trey kept going back and forth in trying resolve some issues with the percussion tracks. Says Leon, “I was aiming at a percussion track that had a heavy improvisational feel to it and yet, kept a structure from which we could build on. Even though I somehow managed to kept it all in time and with a somewhat logical sense of phrasing, the overall sound came out a bit confusing and we couldn’t get the rest of the instruments to quite develop their own parts until I reworked the drums and percussion. In the end it all worked out fine and we were able to move forward. After a few months, I went back into the studio and expanded the piece. I also added more percussion tracks as well as other tracks including the sounds which can best be described as a mix between a drowning cat and something Adrian Belew would do if he played under water. Jokes aside though, the sounds were fun to work with and in my opinion, add a lot to the overall piece.”

As far as the film goes:
Says Leon, “Usually the difference between something looking professional or not is money. Making your own albums or making your own short films require lots of money which is something we could always use more of. I self-finance my projects so I have to be very conscious of where my money goes. Like many people I have big dreams but not enough funding to make them happen. Instead, I get creative with my approach. I have been fortunate enough to have travelled around the world. Some places leave a bigger impression than others but when I visited Japan it left a big impression on me. Tokyo is an amazing city that at night it takes a very science-fiction aura to it. It is a place where old traditions literally meet the latest in technology creating sometimes such a big contrast that can be taken as chaotic, depending on your point of view. To capture the frenetic pace of it was something that appeal to me. Like Tokyo, there are many places in the world that carry a similar sense of what I call 'controlled chaos'. Vegas for example may not seem that chaotic despite the large mass of people walking the streets but when it’s viewed through time-lapse photography, it changes the way we perceive it and it starts to look more chaotic. And of course, in most of the places that I have visited I didn’t have a high-end video camera to capture everything I wanted to capture. When it came to make the film I went to a firm that specializes in handling stock footage and its rights. With the help of a friend of mine who's in the video business, we looked at hours and hours of film stock before settling into what we would use for the short film. The real job came into editing all of the cuts that comprise the film. I hope that people will like it enough to share it with friends. My main goal is to reach as many people as possible to watch the short. The few people that I have shown the final cut seems to really like it which is always encouraging.”

Leon's recordings date back to the late 70's, but it wasn’t until 2008 that he released his first album, 'Plays Genesis and Other Original Stuff'. The record drew on his strongest musical influences, primarily, the many styles in Genesis's lengthy career. By this time he had been living in the United States for some time as an award-winning designer creating, among other things, artwork for album covers and promotional posters for many of the bands and musicians he had been originally impacted by, such as Jethro Tull, Roger Waters, Phil Collins, King’s X, Yes, Genesis and Jeff Beck. Approaching the work as both soundscape and visual has given Leon unique insight into broadening the experience as a whole.

By the time “Strangers in Strange Places” was released in 2010, Leon had refined his method and his vision, and it's the audience who wins. “Strangers” features Brand X's John Goodsall on guitar and the legendary drummer Bill Bruford (Yes, King Crimson, Earthwork) and reveals an intertwining of progressive rock and ambient textural sound that then blossoms in his third release, “2014, Music from an Expanded Universe”.

Not one to sit idle, Leon already has his next project slated for release in 2016, an album of original music featuring ex-Yes men, Billy Sherwood and Rick Wakeman, as well as a solo project of previously unreleased pieces. These push further into the artist's evolution as a first foray into cinematic instrumentals and classically inspired composition.

In closing, Leon has this to impart, “I hope that people will watch the short film and listen to the music. My wish for this project is for it to make people take notice into my other projects and check for themselves what my music is about. I have had the good fortune to have worked with and featured some very well-know talented people in my projects. Some of them are my musical heroes, people like Bill Bruford, John Goodsall, Trey Gunn and Jerry Marotta to name a few.

“To the people that might have seen the name but aren't too sure if they want to plunge at least a dollar for a download, please do. If you like bands like Genesis, Yes, King Crimson and Tangerine Dreams, I don't think you’ll be disappointed and if for whatever reason you do end up disappointed, take refuge in knowing that it was only for the same price as a pack of cheap gum.

“Next for me is the completion of my latest album which is very different from my last CD and the music for the short film. It is a project that’s taken a lot longer than I ever anticipated but at the same time I didn’t want to rush just to release it. For that project, I have some very special guests like Billy Sherwood, who plays the guitars throughout the album and Rick Wakeman, who makes an appearance in one of the songs. The project is not quite finished so there is always a chance for other guest musicians to show up. I will also like to make more videos to go along the music of my existing catalogue so expect some of that. You can watch my videos, promos and interviews on my Vimeo or YouTube channels.”

The new CD single includes the tracks “Persistence” and “Red Like Blood” (from Leon's “2014 Music From An Expanded Universe” album).

To listen to the music only:
http://mrrmusic.com/leon-alvarado/