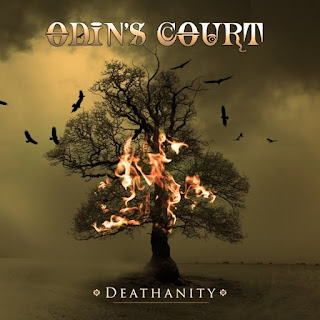 Baltimore, MD - USA based progressive rock and metal band Odin's Court's announced the re-release of their 2008 album Deathanity (R3) for March, 1 2016. Deathanity (R3) is a “reboot” of the original ProgRock Records album, consisting of a remix (original recording), new recordings (e.g., vocals), and a re-master.

Band leader Matt Brookins commented on the decision to revisit Deathanity: “This was an important album to the band – we worked hard independently, and then shopped it to labels. It was picked up by ProgRock Records (2008), and to date remains our best selling and most popular release. While we were, and still are, proud of what we did, there are some factors that made us want to revisit and improve the quality of the album…mainly, the addition of Dimetrius LaFavors (lead vocals), but also my improvements as an engineer and producer. Additionally, the concept of the album is becoming increasingly important in today’s world, so hopefully we will reach even more ears with this re-release. Stylistically, this album is heavy, progressive, and artsy.”

“There's wonderful variety from section to section, the instrumentation and the songwriting are clearly the album's strengths.” – Sea of Tranquility

“The sound of the group is quite personal with a lot of quality, and fantastic production for their music, very pleasant to the ear, nothing strident, with guitars and smooth refining where all instruments are in a place where you can distinguish each of them with complete ease.” – Hall of Metal

“Matt Brookins has succeeded in serving a fantastic album to the inclined listener. From the first minute until the last there is insanely much to discover, and the protagonists are true masters of their instruments.” – Rock Times


The band is continuing off the momentum gained from the positive press received on their latest album Turtles All the Way Down (2015):

“Odin’s Court has quietly become one of the best bands in the American Progressive Rock scene, and this album is a perfect example of why that is the case.” – Hard Rock Haven

“Terrific melodic prog/metal that gets better with every listen!” – USA Progressive Music

“The band plays heavy rock inundated with catchy guitar riffs, cool keyboard passages, and excellent lead vocals…the music is so well played, upbeat and catchy as any rock/metal album I have heard in a while.” - Sea of Tranquility

“The strengths are undoubtedly the singing, orchestration, and the work on the guitars. It is highly recommended listening!” – MusicInBelguim.Net