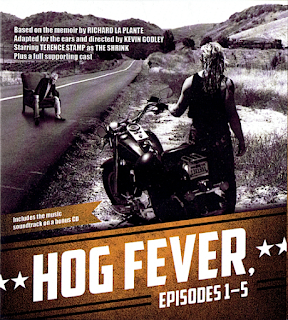 RICHARD LA PLANTE: I’m dribbling into a microphone in a tiny LA sound studio, trying to record an audio book of my memoir HOG FEVER and the sound engineer looks as bored as I feel. Then a thought hits me like the crack of thunder from a V-Twin exhaust. Shit! Why don’t I do the Hog screenplay, not the book, and get real actors in, sound effects, Rock music, the works? I’ll phone my writing buddy, Kevin Godley - the Scorsese of music video and we’ll call it an, an…

KEVIN GODLEY: An Ear Movie? Damn right! Once Terence was in, I was, but what the hell is an Ear Movie anyway? Well, it’s a pure audio experience with music plus all the production values of a movie but without any er…pictures! Anyway, once we started writing, a few things became obvious. A) Lose anything that relies on seeing. B) Don’t get lost in sound for sound’s sake. C) Write until your eyes bleed…but hey, who needs eyes, anyway? We’re making an EAR MOVIE!

“HOG FEVER should be outlawed. It's contagious.” - Sunday Times

Midway between the satire of Spinal Tap and the pathos of American Beauty lies the schizophrenic state of mind known as Hog Fever. On the surface this is the story of a man, a motorcycle, and a teetering bank balance. But lurking beneath is the story of a lost soul in search of freedom - or at least one last stab at it. Motivated by the emasculating success of his British screenwriter wife and a love of Easy Rider and The Wild One, Robert Lourdes, a struggling American author on the cusp of forty, finds solace in the Harley-Davidson legend. Hog Fever is Robert's comedy of errors as he embarks on a toot, tattoo-and-testosterone-fueled quest to find himself.

The HOG FEVER CD and download comprises Episodes 1 through 5 plus bonus music soundtrack including 4 original songs by Kevin Godley (10 CC, Godley & Creme, GG/06) ‘The Bad & The Beautiful’ ‘Work Song’ ‘Just Write’ and ‘Confession.’ and a special track by Daniel Ash (Bauhaus, Love and Rockets) ‘Flame On.’

TERENCE STAMP: is an actor. His first title role, in Peter Ustinov’s Billy Budd, earned him a Golden Globe, in 1962 and an Academy Nomination.  He followed this with Modesty Blaise, Poor Cow and Far From The Madding Crowd, his classic portrayal of General Zod in Superman and Superman II, then the films Wall Street, Legal Eagles, The Hit and his award-winning performance in Priscilla, Queen Of The Desert. The title role in Steven Soderbergh’s The Limey, returned him to leading man status and recently Stamp has worked beside Jim Carrey, Tom Cruise, and Matt Damon. His latest film is Big Eyes, directed by Tim Burton. His first Ear Movie is Hog Fever, directed by Kevin Godley.

RICHARD LA PLANTE: is a musician, songwriter and the bestselling author of eight novels and two memoirs, including HOG FEVER, on which this fictionalized Ear Movie is based.

KEVIN GODLEY: is a musician, writer, artist, inventor, and award-winning music video director. He was a founder member of Art Rock band 10cc and Godley & Creme. His music video credits include the Beatles, U2, Peter Gabriel, Sting, Keane, Eric Clapton, Snow Patrol, Alabama 3, and Lou Reed. He is also the founder of WholeWorldBand, an audio/video music collaboration app.