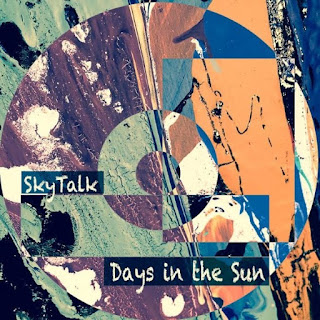 NYC - Much to the excitement of prog fans worldwide, progressive rock trio SkyTalk has released their highly anticipated debut EP “Days in the Sun”! SkyTalk is a 3 piece collaborative effort formed in January 2015 by twin brothers Jordan and Talor Steinberg and Dan “Ello” Costello. Costello was introduced to the twins by a mutual friend while all three were attending Purchase College. They bonded instantly on a similar taste in music, particularly 70's progressive rock bands like Yes and Rush. Shortly after meeting, the three met up again to jam and quickly found that they had an undeniable musical chemistry, as well as similar inner philosophies on life and music. Eager to form a band, the three began writing original music together and were surprised at the effortlessness of the process, writing five songs in a matter of two months that would later become their “Days in the Sun” EP.

Blending their love of progressive music as well as soul and funk influences, SkyTalk polished their newfound sound and recorded the EP in the following months. With a lyrical emphasis on spiritual concepts, and the shared belief that music is a necessary and powerful force of healing and expression in the world, SkyTalk has released their first EP and is currently working on a new full length record which even further emphasizes these principles. The band is currently booking shows in the New York area as their full length record nears completion.

Says Ello, “The theme of this EP is spirituality and healing. The songs deal with healing past hurts and coming to terms with who you really are now as apposed to who you thought you would be. Meditation and becoming free of your mind was another revolving theme, especially in the song 'Fall Awake'. 'Say' deals with honesty and overcoming barriers that prevent one from opening up completely to others.”

The album was written between the Steinberg brothers basement and the music school where the three all teach private lessons. Each song began as pieces and were refined through jam sessions between the three and further planning in the studio. Lyrics always began as a conversation and were written after the music was ready. The recording process took place over a few months and was recorded between three different studios, engineered, produced and mastered by Jeremy Kinney, a friend of the three from school. NO metronomes were used in the recording process.

Dan “Ello” Costello has been drumming and writing music since he was 15. In and out of a few not so serious bands in high school, he also wrote original music of his own, both electronic and singer songwriter solo projects until joining SkyTalk. Ello is currently studying music at Purchase College and working as a drum instructor at School of Rock. Jordan and Talor Steinberg have been performing in bands since their early teenage years, playing all over the New York city area. Outside of the band the two are currently private music instructors.

SkyTalk is currently booking shows in New York and in the East Coast, as well as beginning to record a full length album. They are also working on two different music videos, one of a cover and one for their original song “Days in the Sun”.

In closing Ello has this to impart. “The message of SkyTalk's music is to believe in positivity, spirituality and to dare to be yourself unapologetically. As musicians our goal is to continue to push ourselves past our limits and write music that continues to challenge us.”

To purchase SkyTalk “Days in the Sun” EP: http://skytalkband.bandcamp.com/releases