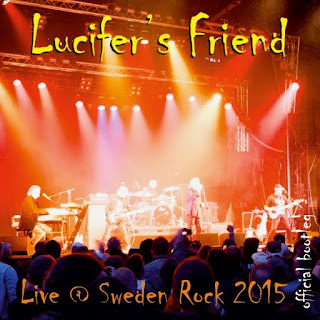 London, UK - Rock legends Lucifer’s Friend reformed in 2015, some 20+ years after they were last together. LIVE @ SWEDEN ROCK 2015 captures the band’s performance on the 4 Sound Stage on Friday 5th June 2015 as the HEADLINE act. The set list includes the band’s greatest hits from the 1970s plus songs from the recently released ‘Awakening’ title.

Lucifer's Friend formed in 1970 with their influential and groundbreaking self-titled album, famous album among connoisseurs of 70's hard rock. Its heavy and majestic overtones made it a pioneer release of progressive rock genre.

The group went on to release six albums in that decade. In 1976 Lucifer's Friend suffered a hard blow when British vocalist John Lawton jumped ship for none other than Uriah Heep. The band broke up in 1982 and briefly reformed in 1994 for their ninth album “Sumo Grip”. Now they're back, after 20 years, literally by the fans' request…

“This being only the second live concert since our reformation, we were all of course a bit nervous. However the crowd made us more than welcome and after the first few notes, the adrenalin kicked in and we were up and running. To play Sweden Rock Festival...one of the biggest festivals on the circuit was for us a great honour and one which we will hopefully repeat. This live album represents the band in full flow and with a new studio album planned in 2016, we hope to go on 'Riding The Sky'” - John Lawton