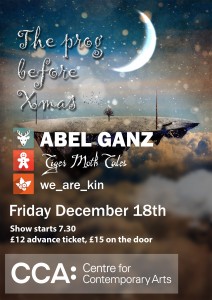 As the title of this review suggests, the gig I attended on 18th Dec was indeed, The Prog Before Xmas and highlighted 3 artists, We Are Kin, Tiger Moth Tales and Abel Ganz. The evening was several months in the planning and the “main man” behind it all was Dennis Smith, who also happens to be the drummer in Abel Ganz. Running to a strict time restriction, the bands managed to set up, play and remove material from the stage like clockwork.

First up were We Are Kin, who in fact were giving us their very first live performance. Initially the band seemed a little tentative and apprehensive, but quickly settled and produced a stunning 45 minute set. The band had released their debut album, Pandora, on Bad Elephant Records, earlier in 2015. Onstage were 6 musicians, Dan Zambas (keyboards, guitar), Lee Braddock (bass), Emma Brewin-Caddy (vocals), Nuru Ramadhan Saadi (vocals), Gary Boast (drums) and Adam McCann (lead guitar), but due to recent changes only Dan, Gary and Adam remain from the band that recorded Pandora. Pandora is a 13 track album and 7 of the tracks were aired during the set. The opening track, “Home Sweet Home” as I indicated, started a little nervously with several glances passing between the band members, but as they moved into “The Hard Decision” and further into the set, the nerves settled and they relaxed into the music and the crowd were treated to some excellent modern progressive music. Fronted by the two female vocalists, (Emma and Nuru), having a solid rhythmic foundation (courtesy of Lee and Gary), some soaring guitar work (Adam) and completed with the majestic keyboards (Dan), the band received a rousing cheer at the end of the set by the appreciative audience. It was difficult to believe that this was the debut live performance, and certainly bodes well for a great future.

A quick removal of much stage equipment and soon the stage was set for the second set, provided by Tiger Moth Tales, which is the name of the creative vehicle for Peter Jones. Peter has been in the music industry for many years, winning the junior final of BBC TV’s Song For Christmas (1988), being a finalist on BBC’s Star For A Night (2001) and also on ITV’s The X Factor (2004) as well as touring with The X Factor Tour in 2005. Since Peter has moved into the progressive music area, he has released 2 full length albums, Cocoon (2014) and Storytellers Vol 1 (2015), as well as some live material EPs. Tiger Moth Tales is simply Peter sitting at a keyboard with a guitar fixed horizontally above and across the top of the keyboard. As soon as Peter started, the crowd realized that this was something very special and the conversations in the crowd, that sometimes permeate performances, simply stopped. Peter gave a superb selection of music, mainly from the Cocoon album (“Tigers in The Butter,” “Don’t Let Go..Feels Alright,” “The Merry Vicar,” “A Visit To Chigwick”) one track from Storytellers Vol 1 and 2 covers from one of his favorite bands, Genesis, in the form of “More Fool Me” and “Harold The Barrel.” The audience laughed away as Peter explained how he would shout out at concerts asking Genesis tribute bands to play “Harold” and he realized it had become an obsession when he shouted out the same request at a Steve Hackett concert. The set was excellent from start to finish with music of the highest quality, as Peter is a very accomplished musician with a voice that is so powerful and clear, and the humor he injected by including “The Merry Vicar” and “A Visit To Chigwick” made this 45+ minutes a majestic and mesmerizing part of the evening. (Although not aware at that moment, Peter would make another appearance later in the night).

With another relatively quick period of dismantling, removal and replacing stage equipment, the stage was set for the arrival of Abel Ganz. Abel Ganz are a Glasgow band, and 2015 certainly seems to have been the year of the “breakthrough” and this Prog Before Xmas concert was to celebrate a return to the Centre For Contemporary Arts, where the year had started way back in January. The band was originally put together all the way back in 1980 by Hew Montgomery (keyboards) and Hugh Carter (multi-instrumentalist) and has undergone several personnel changes over the years as well as releasing 6 studio albums along the way. The band on stage comprised Denis Smith (drums), Steven Donnelly (bass), Davie Mitchell (lead guitar), Iain Sloan (guitar), Jack Webb (keyboards) and Mick McFarlane (vocals and guitar), but also present in the audience were those 2 founding members of the band, Hew and Hugh. Launching into “Rain” from the Danger of Strangers album (1988), the band soon had the audience eating out of their hand. This opener was followed by “Ventura” from the album, Shooting Albatross (2008) which was received as raucously as the opener and then the band moved onto the latest release, simply called Abel Ganz, from 2014. First up was the 5 part suite from the album, clocking in at well over 20 minutes, “Obsolescence Pt 1-5”, and a stunning live interpretation which led on to “Recuardos,” a much gentler paced track which fitted the proceedings like a glove. The music was cranked up a little for the rousing “Unconditional” and unbelievably that was the set almost complete. The crowd had been treated to a stunning 60+ minute set of progressive music, veering from powerful driving rock to the gentle acoustic moments and showed their appreciation by demanding the band return to the stage. Several moments later, the cheer that erupted ushered the band back on stage. The first piece of music they moved into was “Thank You,” from the Abel Ganz album, one of the gentler pieces of music with stunning guitar work and a nice little Gaelic verse thrown in for good measure. This piece of music also had a personal meaning as it was the piece chosen to finish my wedding ceremony in April 2015, and it made for a special moment as The Landlady (my wife) was also at the gig. There is no praise high enough to use to describe the overall evening with the band hitting the bulls-eye right from the off.

A truly wonderful evening of music provided by 3 excellent artists and it wasn’t quite finished. When “Thank You” finished to huge applause, there was a flurry of activity at one side of the stage and joining Abel Ganz on stage appeared Tiger Moth Tales himself, Peter Jones, clutching his trusty recorder. The final piece of music “Run With The Fox,” originally released just prior to Christmas 1981 by Chris Squire and Alan White, was the perfect ending to a perfect evening.

To sum up the evening is simple as it was just a magnificent night of superb music from 3 artists who, in turn, each provided excellent entertainment and for the crowd, made sure that Christmas arrived a week early.