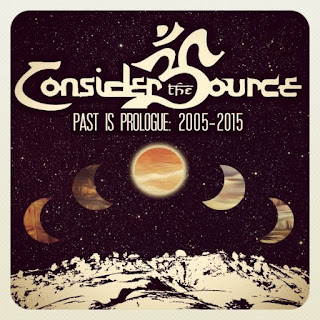 New York – NYC Prog trio Consider The Source has just returned from 2 weeks of performances in India with a special gift for their fans. The band is celebrating their 10th anniversary with a free compilation demonstrating their unique “sci-fi Middle Eatern Fusion” sound. The collection, titled “Past Is Prologue: 2005-2015”, consists of tracks from every studio album they have ever released including multiple cuts from their recent “World War Trio” series and showcases their Eastern informed blend of progressive metal riffs, cinematic orchestrations, ripping odd-time improvisations and worldly acoustic grooves. See the track list below and visit this link to download your copy. They launch an extensive US tour this weekend beginning in Albany, NY.

Says the Band, “We're celebrating 10 years of CTS by giving away a FREE compilation album spanning the history of our career, from our beginning as an occasional jam between friends, to a serious band with the momentum it currently has. It includes cuts from all of our studio albums including a Bonus Track from our Untitled EP released in 2005. We hope you enjoy and be sure to check the tour dates below to see when we're coming to you're area!!!”

Formed in 2004, Consider the Source features Gabriel Marin on fretless double-neck guitar, bassist John Ferrara, and drummer/percussionist Jeff Mann. Called “the guiding light for his generation of six-stringers”, Marin channels the mystical fury of McLaughlin and Coltrane into wailing melodies, kaleidoscopic soundscapes and boneshaking riffs. With a background in classical musics both European and Indian, and an instinct for avant-jazz and destructive metal, Marin's hypnotic fusion of styles is ever unpredictable. Ferrara's propulsive, percussive attack, equally suited to simple grooves and impossible chords, can ground the music or launch it into space. His madcap gumbo of slap bass, Indian rhythms, earthy minimalism and complex tapping constantly pushes into strange new worlds, whilst still dropping thick booty-clap beats. Underneath them lies Mann's rolling thunder; dense rhythmic architecture built from pure swagger and bounce. Half double-bass prog-metal, half crackle-pop Buddy Rich swing, with African and Balkan swirls, Mann's muscular, freewheeling polyrhythms are the engine fuel for CTS's multiversal mischief. Even when not improvising, The trio's music is always a conversation, a roiling stew of dynamic interplay. Each member of Consider the Source
alternately leads and follows, spars and assists; in any single song, alliances are made and broken, bargains struck and divorces finalized.