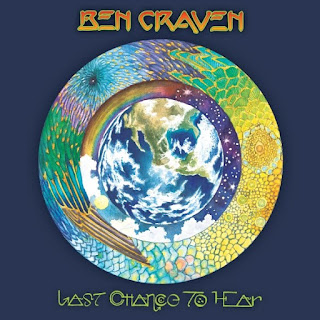 Says Ben, “ 'Last Chance To Hear' is loosely inspired by the end of the music industry as we knew it. There’s never been a time when so much new music was being made by so many people and being listened to by so few people. The concept of paying for new music is now alien to a lot of the audience. Digital downloads have made physical media virtually obsolete. Streaming services mean that anybody making new music is now competing with the whole history of recorded music. And the album format is in danger of becoming extinct. There's never been a time full of more 'opportunity' than now. So I made an album about it.

“The new album is a logical progression from my previous album, 'Great & Terrible Potions'. The arrangements are more confident and more purposeful. But probably the biggest difference is that there are fewer vocals on this new one. 'Last Chance To Hear' is more about having the confidence, and presumably the competence, to let the music do the talking.”

The obvious question is how did Ben recruit such iconic artists as William Shatner and Billy Sherwood to guest on his new album? Ben explains, “I was not my first choice to perform the vocals on 'Spy In The Sky Part 3'. I pored over the melody and the lyrics to get them just right. But when I finally ran through the completed lyrics in my head, I could only imagine a speaking voice.

“Immediately I thought 'William Shatner!' and loved the idea. Then reality kicked back in and I got on with the job of singing my own vocals. Except the idea never went away. It kept nagging and eating away at me, like all good ideas do. And here I was willing to give up my own vocal performance on the most dramatic piece of music on the album! So I had to stop ignoring it.

“I reached out to Billy Sherwood who as you know produced William Shatner's last album, the excellent 'Ponder The Mystery'. Billy would have been my first and only choice to record the session. I asked him if he thought the concept of having Shatner appear one of my songs would even be possible. Amazingly, everyone agreed, and Billy is the one who actually made it happen.

“Deep down I felt a lingering terror that the music might collapse under the weight of a William Shatner vocal performance. But I suspect Shatner realized the opposite. He played the lead vocalist role perfectly, as boldly and grandly as the music aspired to be. It is an awesome combination and he brought the track up to a new level altogether. I love it.”

Hailing from Brisbane, Australia, immersed as a toddler in the era of big prog rock, Craven taught himself guitar and keyboards and joined a series of bands. None of them made it and none of them remotely played the kind of music that had been burned into his mainframe as a kid. Nonetheless, the songs he wrote accumulated steadily. In 2005, Craven dispensed entirely with the band approach and recorded his debut album, “Two False Idols” under the name of Tunisia. The result was a work of incredible maturity, with influences ranging from Pink Floyd and Brian Wilson to the likes of Bernard Herrmann and John Barry.

As Craven worked his first album it became painfully obvious that the music business was in the midst of a sea change, and most of the old guard didn't seem to realize they were the cause. Very quickly he took an anti-DRM stance and released the live acoustic EP “Under Deconstruction” as a high-quality free download.

Craven stepped up a gear for his sophomore album, “Great & Terrible Potions”. Delivering on the cinematic promise of “Two False Idols”, “Potions'” went widescreen as Craven blurred the boundaries between conventional songs and orchestral soundtracks. Augmented by a stunning cover designed by legendary artist Roger Dean (Yes, Uriah Heep, Asia), “Potions” was dense, complicated and unashamedly pretentious – everything a good prog rock album should be! Or, to put it another way, Craven sounded exactly like someone reveling in the creative freedom that came only from not worrying about what others wanted, and delivering what he felt instead.

And now, much to the excitement of Prog fans worldwide, Ben is releasing his latest masterpiece “Last Chance To Hear”!

Here's what the press raved about Ben Craven's previous release:

“All the drama, thunder, strum and drang you could want the spiritual grand child of Rick Wakeman and Keith Emerson to bring” - Midwest Record

“Press play and this album does the rest” - Muzikreviews

In support of “Last Chance To Hear” Ben is putting together a one-man show for the album launch event in April, and hopes to develop it for further performances.

In closing Ben has this to impart to his fans and listeners, “This is a desperate time for music. The landscape is littered with album reissues, remixes, repackages and compilations. Record companies are trying to squeeze out every last cent while they still can. Some artists only put out new albums so they can tour. Others have decided that nobody wants to hear their new music so they don't bother making any. There’s so much noise out there now that it’s virtually impossible for anyone to stand out without the marketing might of a big record label. I want people to know that there are still those of us flying under the radar, the obsessives, who make music because it keeps us alive. With no realistic expectations of financial success, it's the anticipation of the next song, the one we haven't finished yet, that keeps us going!”