Dark Pop Duo Corlyx Release Magetic EP ‘One Of Us’ 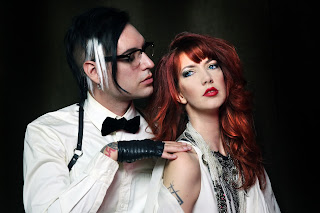 Dark Pop sensation Corlyx are set to release their EP ‘One Of Us’. After kicking off their musical career with the enticing and compelling first single from the EP, ‘Starlet’, the duo is now ready to share a full set of songs that take on influences from electro, goth and industrial rock.

Having been inspired by artists ranging from Bjork to Portishead and The Progidy, Italian DJ and songwriter Brandon Ashley and former nurse Caitlin Stokes have formed their musical collaboration after falling in love in LA which led Caitlin to cash out her retirement fund so the two could move to Italy and start a new life of music, glamour and creativity.

One of their songs on the EP, ‘Narcissistic Girls’, captures their decision of leaving LA just like their first release ‘Starlet’ by drawing on the superficiality and vanity that often accompanies the insatiable strive for fame that many young girls in LA succumb to and also , as the band explains, the “narrative of narcissism in our social media driven society”.

After living the life of an authentic rock star whilst with his previous band Brandon Ashley & The Silver Bugs, Brandon is no stranger to the excess and madness that goes hand in hand with rising fame. He had already had a history of overindulging in recreational substances after grieving over the loss of his dad when he was 18.In Caitlin the musician and DJ has found someone to confide in since both band members have had a long story of traumatic experiences involving family dramas, illness and drug abuse while growing up.

Caitlin’s childhood and youth was particularly burdened since she used to suffer from severe deformities in her spine, an illness called Marfan Syndrome. As such she grew up feeling alienated due to her looks. When she underwent a life threatening surgery for her condition she found herself in a completely different body and the pain she had to endure made her depressions worse than before. Their next single release ‘Nobody’s Happy’ touches upon this exact experience. Corlyx explain: “The song and music video to it are about how childhood trauma inhibits our ability to be content in our adult lives, warping us emotionally and sexually. “ The video premiere for ‘Narcissistic Girls’ is set for 27th February 2016.

Having come a long way from personal and mental distress both Caitlin and Brandon have a natural distaste for the LA lifestyle that is mostly centred around fame and celebrity craze: “The EP puts a spotlight on our past in Hollywood Land and takes an overall stance against the artificial and the superficial.”

While Corlyx show distaste for artefacts with no substance and originality, they have created their own world of glamour and fashion in which authenticity and self respect precede the blind chase for plastic fame which often requires artists to lose their dignity. Instead, Corlyx combines a talent for dark and mysterious sonic elation with a sense of fashion, art and glamour that touches upon the realms of bizarreness and otherworldliness.

The EP ‘One Of Us’ and the second single release ‘Nobody’s Happy’ will be out 13th February 2016.