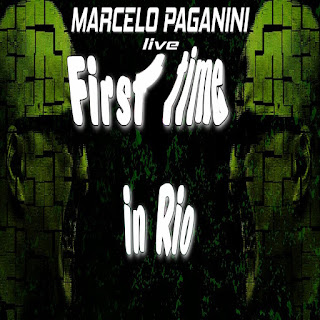 Paris - French-Brazilian guitar virtuoso Marcelo Paganini has been away from his native Brazil for more than 11 years when he booked a last minute tour in December 2014 to release there his critically acclaimed prog rock jazz fusion album “2012 Space Traffic Jam”. Three gigs in his home town Belo Horizonte, including the private party for Marcelo's 50th anniversary, and three gigs in Rio de Janeiro where he has never played before with his band. Being also a film maker, doing what he calls “No BS films” (means “no budget/no script films”) since 2003, Paganini decided to make a rockumentary about the tour: “First time in Rio” (“Primeira vez no Rio”) 34 minutes 57 seconds, color, France, that was concluded in March 2016. There is also one extended version planned, around one hour long, with more live songs. The rock doc will be screened at Portobello Film Festival in London next September. The live soundtrack of the film is being released in April the 14th 2016 on CD Baby “First time in Rio - Marcelo Paganini Band Live”. 49 minutes of music in 6 tracks. 5 from the “2012 Space Traffic Jam” album: "Sphinxes of Babel", “Crying With a Smile”, “Somewhere Somehow”, “B4ever Now”, “Somewhere Somehow” encore and the instrumental bonus track “Trindade” used in the end credits of the film. All songs and lyrics by Marcelo Paganini.

As a film maker Marcelo Paganini participated in festivals in several countries (Brazil, Netherlands, Iceland, France, UK) and made, among others: “Interactivity”, an experimental film in 35 mm in 2003; signed a distribution deal in Hollywood with Big Films Short/Tigris Films in 2007 for his short “The 8th Bullet”; was selected at Short Film Corner, Cannes Film Festival in 2008 with “The 8th Bullet Samba”; got short listed on “Best Musical Film” at Portobello Film festival in 2011 with “2010 Os Mutantes - Back to Paris” and won the “69 Hours Film Challenge” during the same Festival.

Several top Brazilian musicians participated in the documentary “First time in Rio”: the founders (with Milton Nascimento) of the world famous mouvement “Clube da Esquina” (Corner's Club) Marcio and Lo Borges, Claudio Venturini from 14 Bis band, Marcio Buzelin from Jota Quest band, one of the most popular rock bands in Brazil, among others. Also interviewed for the film were two out of three original members of Marcelo Paganini's band in 1983, when he played his first theater show at ICBEU in Belo Horizonte and performed “Sphinxes of Babel” live for the first time, song that opens his “2012 Space Traffic Jam” album released in 2014.

On this tour Marcelo Paganini had a great band in Belo Horizonte with Leo Javali on bass, Walner Lucas on keys and Christian Weber on drums. They played to a full house at Gilboa, the crowd sang along, danced and went wild. There are many videos on-line. They also played the birthday party and the last gig in town at Livraria Status, an open air show which was almost canceled because of the rain. People came anyway with umbrellas and at the end the sun showed up as well.

In Rio, Marcelo Paganini also got some of the best musicians in town, therefore in the country: Milton Nascimento's keyboard player Kiko Continentino, with whom he had a jazz duo back in 1987. Almost 30 years later, they connected together again like no time had passed, and shared adventurous and burning hot improvisations. Kiko Continentino is one of the most exciting keyboard players in prog rock today and joined one year ago legendary Brazilian jazz band Azymuth. Sergio Brandao, the first call Brazilian bass player in New York City, and Paganini's friend for over 25 years also joined his band for the Rio leg of the tour. Cassia Eller's (one of the top Brazilian rock singers who died in 2001) drummer Elcio Cafaro was thrilled to accept the invitation for the shows. Elcio was on the cover of Modern Drummer Magazine Brazil last January. With only two half rehearsals the band fusioned around the complex compositions playing with fire and passion like if they have always played together. The first show was at Audio Rebel on December the 22nd. The 23rd it was at Godofredo Rio and the final gig of the tour was at Vizta on the 27th. The CDs sold out during the tour but are still available on line. Marcelo Paganini came back to France without knowing if or when he will come back to Brazil.

There was an  overwhelming response on the Internet when the video of “Somewhere Somehow” on Facebook. https://www.facebook.com/13255032254/videos/10153135644402255/  More than a thousand video views in a single day! As Marcelo Paganini puts it: “There are two versions of the song on the live album, completely different from each other, always fresh approach, instant group composition. The encore was melting the walls. Gary Hobish from A. Hammer Mastering in San Francisco did an awesome job, this was one of the best shows in my life  and I am glad to share it with the world.  Once you walk in the right direction the whole Universe conspires to help you. Sounds like ready-made wisdom, but it turns out to be true. If you try to please everybody you will fail and go crazy. 'My music will please somebody else, at least I now it pleases itself'(from “Somewhere Somehow”). Sometimes when you don't know what are you doing means you also don't know it can't be done. It is all about letting interesting accidents happen. The music industry is obsessed with audio quality, and rightly so. Me too. But in 2016 people are listening to music on their phones, on ear buds and on computer speakers. Some people, me for example, prefer to hear an spectacular performance with less than ideal sound quality, rather than a lifeless musical noise perfectly recorded. Robert Johnson rules. Same thing applies to my film. It is no budget, not Hollywood, capisco? Do it yourself Mode: ON. If you put ten or more people in there with lights, wires and stuff, nothing spontaneous can happen, or rarely happens. It is completely artificial. Everybody else goes around trying to make 'good' films, but we all know most films are 'bad'. I only go around to make 'bad' films. Since I can't do anything right, even starve as a musician/film maker after all these years, maybe at the end my films will be 'good'. At least to the right audience. You can not be everything to everybody. The trouble is not being pretentious, the trouble is being up to the pretension. I went there for one month alone with just one old camera, one suitcase, one guitar, one effects rack, one old laptop computer. I made two bands, rehearsed a little bit, played 6 shows made a film, and a live recording out of it. I edited and posted on line several videos. I also composed a couple of songs and did some recordings. How many people can do that?  I mean, most people go to Brazil for a month and do nothing but stay in the beach until they turn red shrimp. And my mom asking when I am going to have a real job... The content is the most important thing, even with rough edges. I make stuff happen in front of my lonely camera, I direct the REALITY. I found my public at Portobello Film Festival, we feel the same way. "

After being added by organizers Rael and JoJo Razor at the last minute to play with the After Hours Electric Prog Jam on the Cruise to the Edge 2015, Marcelo Paganini stunned the audience at the pre-sail party at Magic City Casino in Miami with a very emotional (it was the following day of the Paris Attacks) and breath taking interpretation, even after breaking the D string of his guitar in the middle of a very demanding King Crimson song and keep playing to the end. The performance was shot with 5 cameras and will be available on-line soon. One camera video is already on-line. There was no rehearsals, no scores, no sound check, some musicians met on stage for the first time. They are all passengers of the cruise who organizes themselves over the Internet to play the most demanding prog rock songs without rehearsing. Famous musicians from YES and other bands joined the jam during the late hours.

Cruising from Miami to the Bahamas and back, Marcelo Paganini rocked the ship. Check out the pictures and videos already on-line. Paganini also re-connected with YES bass player Billy Sherwood who agreed to record one song with original YES keyboard player Tony Kaye on the follow up to his album “2012 Space Traffic Jam”. Gary Husband will record the drums once again, with Marc Madore on bass. Eumir Deodato is also expected to come back on keyboards in a couple of songs. The album is still in the early stages, Paganini composed a couple of very promising tracks that gave him the confidence to push the project forward. The idea is to record later this year and release it in 2017. There will be another Cruise to the Edge in February 2017 and Marcelo Paganini is hoping, like all the other prog acts not already in the bill, to be invited with his band by Larry Morand. “Cruise to the Edge was one of the best experiences in my life. It was very touching to see several people asking for my band on the cruise's group, it went straight to my heart. Guitar Player Magazine showed interest in sharing my memories, pictures and videos from CTTE 2015 in a blog that will be on-line soon. They already published an article on my live album,” smiles Paganini. http://www.guitarplayer.com/artists/1013/gp-now-hear-this-alumni-marcelo-paganini-releases-live-in-brazil-film--cd/57587

Marcelo Paganini is currently looking for a singer to record with him, “someone ideally living in France or Europe who loves prog rock jazz fusion, digs my music and has no trouble with odd time signatures and strange melodies and harmonies. I wish Glenn Hughes would be interested, even if he lives in LA. ” Paganini is also looking for a keyboard player to do a couple of gigs in France later in 2016 or early in 2017, “someone glad to learn the parts on the album and who can improvise wildly. The ideal person would also sing to keep the band a quartet and may record on the next album too.  If you are interested send me a message on Facebook with some video links”. Paganini recorded most of the keyboards himself on his last album, and wish he had Shiva-like extra arms to play guitar and keys at once. The live band in France has Marcelo Paganini on guitar, Marc Madore on bass and Christophe Bras on drums, they have been together for many years. They will start recording Marcelo Paganini's new studio album later this year, for a release in early 2017. Special guests Billy Sherwood, Tony Kaye and Eumir Deodato will also contribute.