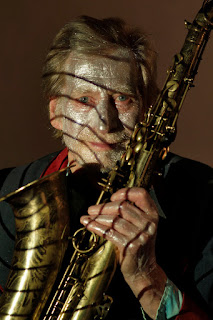 London - In response to a recent article in PROG magazine Hawkwind legend Nik Turner had this to impart:

“It sorely saddens me that the members and previous members of that once noble group, Hawkwind, of which I numbered myself a part at the time, are not all able to communicate in the same loving way that we did, back in the day, when the band's success was enhanced and encouraged by the love and creative input and energies, much of a wise and Alternative ilk, of such loving and caring people as Mr Barney Bubbles [RIP], Mr Michael Moorcock, Mr Jonathan Smeeton, Mr Robert Calvert [RIP], and many more, who gave their unconditional love and creative energies to the band. Come on, guys, let's work together. I wish all members of Hawkwind, past, present and future, nothing but health, wealth, success, happiness and loving energy. Let's all be friends, life is too short for any other course.”

Turner, the inexhaustible saxophone and flute-playing co-founder of space rock legends Hawkwind, is set to complete a tour throughout Europe and Japan as well as a return Stateside for another tour this Fall accompanied by up-and-coming kraut/prog rock band Hedersleben. Dates for the U.S. tour will be announced later this month. Following what has been widely regarded as the most ambitious album of his career, one that MOJO called “a sprawling but polished album,” Space Fusion Odyssey, Turner continues his astonishing career rebirth with a newly reinvigorated sense of musical creativity and sonic exploration. Turner’s most recent offering is a full-length album of improvisational jazz freakouts with a Seattle-based ensemble, which includes drummer Jack Gold-Molina and guitarist Dennis Rea (both of psych/prog band Spectral Waves), alongside bassist Paul “PK” Kemmish. Dubbed Flame Tree, the group released its self-titled album last month on Cleopatra’s Purple Pyramid imprint.

Frequently called “The Spirit Of Hawkwind,” Turner was a major creative force during that group's most critically acclaimed and successful period, 1969-1976. His outlandish costumes, improvised sax and flute playing, and general wild man persona became iconic representations of the band, and he would go on to pen some of their most popular songs including “Brainstorm” and “Master of the Universe.” After leaving Hawkwind, Turner used his newfound freedom to travel to Egypt, where he soaked up the history and culture, and also made a recording of his flute music in the King's Chamber of the Great Pyramid of Cheops. In 1985, Turner relocated to the western side of Wales, where he set up a new age community in a fairly rural, isolated area. He has continued to release new music including 2013’s Space Gypsy and 2015's Space Fusion Odyssey. A brand new track from his forthcoming studio album premieres on a special 6CD box set called Space Rock: An Interstellar Traveler's Guide. This incredible collection features a diverse sampling of space rock artists young and old including Hawkwind, Amon Düül II, Ozric Tentacles, Gong, Can, Earthling Society, and Hedersleben along with a whole host of others!