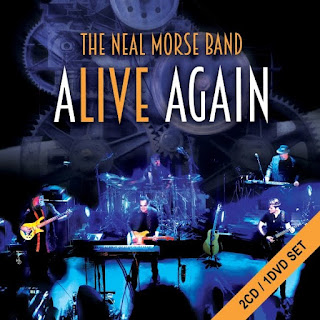 Nashville, TN - Much to the excitement of Prog fans worldwide, The Neal Morse Band will be releasing a new live 2CD/DVD set and Blu-ray on August 5, 2016 titled “Alive Again.” Riding on the tremendous success of their breakthrough album, “The Grand Experiment,” The Neal Morse Band set out on a tremendously successful world tour in the spring of 2015. Neal Morse and Mike Portnoy have teamed up with Randy George, Eric Gillette, and Bill Hubauer to create one of the greatest progressive rock bands of all time. Full stop. “Alive Again” will be available as a DVD/2CD set and a standalone Blu-ray and shows the band at the top of their form performing for a rousing audience in The Netherlands on March 6, 2015.

Says Neal, “The Alive Again tour and this DVD/Blu-ray is one of the finest we have ever done. In my humble opinion… It's really great! I think you all are really going to dig it. Check it out and you'll understand how amazing this band is! I love it!”

“The Neal Morse Band is a force of nature. They have evolved into a great live band, one that is as good as there is in music and they really shine on this live set. The performances here are jaw-dropping and might have you giving a standing ovation from your couch.” - Roie Avin, The Prog Report

To the delight of his passionate and growing fan base, there seems to be no end in sight for the magical music and masterful musicianship that flows from the mind and hands of Neal Morse and his band of virtuosos!